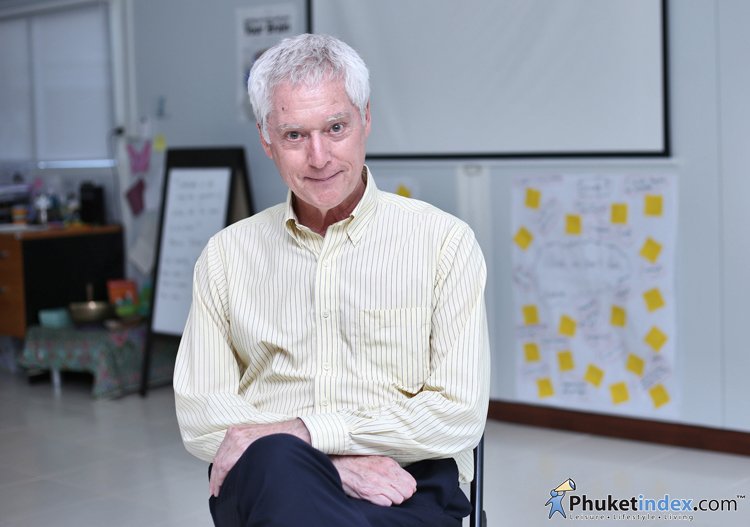 Dr. Alan Wallace recently visited Phuket and Phuketindex had the opportunity to meet and chat with him one afternoon at Thanyapura Phuket to learn more about his learning and teachings as a renowned expert on Tibetan Buddhism. Dr. Alan Wallace left us some thoughts that we think can inspire you as they do us.

“I’d rather fail at striving for the best thing
I can imagine than succeed by striving for something
that I know is clearly inferior.”

Please tell us the story of your prior successes, challenges, and major responsibilities

In term of successes, from early on I became quite fluent in spoken and written Tibetan. Learning how to speak and understand Tibetan opened up many doorways for receiving the wisdom from a great number of truly marvelous Tibetan Lamas. It’s very helpful just having that avenue to a whole civilization and the richness of Buddhism.

As for challenges, I still find it challenging to encounter people, especially people in positions of influence, who should be in the role of serving the public but use it primarily for their own sake. I find it’s difficult not to be judgmental. Some people are very famous and could use their fame in a very helpful way. Instead, they just use it to gain luxury upon luxury. I really feel their behavior is very inappropriate and sometimes expressly inappropriate. But when all is said and done, they are people just like me.

I’m a Buddhist. I follow the teaching of the Buddha and in the Buddha’s discourse on loving kindness of Metta, he said, “Let no one despise anyone anywhere.” It’s challenging but that’s the challenge I must embrace because I don’t want to be a contemptuous person no matter how other people behave.

For a number of years now, I’ve been spending a lot of time traveling in response to invitations. Rather than doing many teaching classes all over the world for a week or a weekend at a time, I’m moving more towards spending more time in one place and trying to give in-depth training so that people can go much deeper in their own practice and happen on the very deep wisdom of Buddhism and other traditions. So I’m moving more to the contemplative life and away from a very active world life.

Who inspires you the most?

That’s clearly the Dalai Lama! I first met him in late 1971. We had a conversation and it’s probably the most memorable conversation I’ve ever had in my life. I posed a question to him about my own practice and he gave me the wisest answer that you could imagine and it’s stayed with me ever since. I’ve translated for him on many occasions. He has guided me personally in my practice since 1971 and I just find him an utterly extraordinary human being in terms of his complete simplicity and humility but with such tremendous wisdom. He is incredibly knowledgeable but also shares his kindness everywhere he goes. It’s just kind of like an ongoing flow of compassion. So he’s earned my deepest admiration. He’s my Lama, my Guru and he inspires me as he inspires many other people.

What is your favourite quote? Why?

Probably it is a very simple one by Dalai Lama, “My religion is kindness.” He is a Buddhist no question but has a sense of empathy, brotherhood, sisterhood with Christians, Muslims, and people who have no religion. Yes, I’m a Buddhist but deeper than that my religion is having a good heart. My religion is kindness. He means it and he embodies it. I’ve seen this in so many occasions that wherever he goes he brings his ongoing spontaneous and effortless kindness. I find that tremendously inspiring.
Then, moving more to the academic side and here is a short phrase from William James, a very wise and deeply philosophical thinker, a fine scientist and psychologist but with such an empathy for religious experience. There is one phrase I probably quote more than any other phrases of Western thinkers. He said, “For the moment, what we attend to is reality.” I just found that to be so true psychologically that attention is always selective. And then this Benedictine monk saying the greatest gift we can give to another person is our attention. These are complimentary statements. I really take them to heart and try to practice them.

What drains your energy? How can you reduce or cut this draining out?

Jetlag. Not many things do because whether my energy is drained or not is not up to other people. It’s not how much work I have; it’s not how many interviews I have. That doesn’t drain my attention. So if I’m drained it’s because I allow myself to get drained. At the end of the day I feel sleepy. Maybe it’s because I don’t have a whole lot of attachment. I have some of course, but attachment means expectation. If I have a lot of expectation, I think a lot and that’s draining.

If you could say one thing to your 15-year-old self, what would it be?

I would say what Buddha said to everyone else and also Joseph Campbell, the great writer about the power of myth. What they said was, “follow your bliss”. Follow that which truly makes you happy. Find out what truly makes you happy and follow that. Wealth doesn’t make anybody truly happy. It comes and it goes.

But there are things that truly make one happy. I kind of made that decision when I was 20. What I did was in a way very reckless because I left Western civilization, leaving all security behind, sacrificing a lot when I bought one-way ticket to India, just doing it because I felt this is what I really feel like. I found fulfillment and that turned out to be the best decision of my life.

So if one really finds what truly makes you happy, I would tell my 15-year-old self not to settle for less and consider your ideals; what is the greatest good that you can imagine and go for that. That’s what I’m doing now. I’d rather fail at striving for the best thing I can imagine than succeed by striving for something that I know is clearly inferior. So I say go for your highest ideal, strive for the highest, find out what really makes you happy. I found with that kind of prioritization, again and again that reality has risen to meet me and the way keeps on opening up. So trust that, trust reality and follow your vision. That’s what I would say.

How does quantum physics reality fit in with Buddhist Philosophy?

Buddhism says you are not an independent entity existing all by yourself. We are not two utterly independent autonomous entities coming in bumping into each other and then, like billiard balls, bouncing off in different directions. It’s a theme of the interdependence, interrelationship between subjects, objects, the world, and the sentient beings inhabiting in the world, they’re all interrelated. This is the central theme. This is not New Age physics. This is very straight forward quantum mechanics. But when we apply this to our lives then we see my very existence in my pursuit of happiness, my pursuit of freedom from suffering is not independent. The whole idea of existing is one of interdependence and therefore empathy, compassion and loving kindness for all those around us who are suffering. It’s simply a reality-based response. It’s taking the theme of interdependence we find in quantum mechanics and applying that in our daily lives. Then we see wisdom underlying compassion and that’s the essence of all of Buddhism wisdom supporting Dharma.

Tell me something that’s true, that almost nobody agrees with you on

My wife and I make the best pizza in Santa Barbara! I say that a bit tongue-in-cheek but it’s also true. We have guests and we serve them. They like it and say it’s a good pizza. But I think we’re only two people on the planet who think our pizzas the tastiest and it is the tastiest for us. I’m pointing out something that’s a bit goofy but it’s also to show that truths have many layers. There are things that are true for me and are not true for anybody else but they’re still true. It’s just a very local truth and then there are broader truths.

Christians have many truths that they share in common and they say this is really true. That’s fine but then a Buddhist might say that, “well we understand that’s true for you but our view is different and we can respect that.” The Dalai Lama said we should respect all religions but that doesn’t mean that we should try to follow all religions. Follow your own religion but have respect and appreciation for all the others. So there are some truths that are local and then there are other truths that are more universal.

What headline would you like to read in tomorrow’s newspaper?

I would love to read that the heads of states especially all of the very highly developed industrialized countries of the world, all got together and said, “You know we all just woke up. We will shift our vision away from more and more drawing from resources for our short-term benefits. We will make sure that human civilization is not being detrimental to all other species, to the whole ecosphere and that we’re sharing this environment for the sake of all of us. We’ll make short-term sacrifices to make sure that the planet we are leaving to our children and future generation is even better than the one we received. We are now being responsible. We will cherish this earth for the sake of all the sentient beings on it and not follow our present policies of short-sighted stupidity and greed. We’re going to stop that now and we’ll all work together to make it happen.” That’d be the best headline I could imagine.

If you could share one message with the world, what would it be?

We need to envision a type of ethics that we can all embrace regardless of very different world views but there is a common ground that I think all people of real consciousness who wish to live good lives and to be responsible in this world that we can all share. That is two simple principles of ethics can we agree that we take is as highest priority ‘non-violence’. That is one half and the other half is ‘benevolence’. It doesn’t necessarily entail religion or any particular belief system but to engage with each other in a spirit of friendliness, of respect, of courtesy and benevolence. Non-violence is better than violence and benevolence is better than malevolence. That’s self-evident. Now let’s work together. That would be the message.