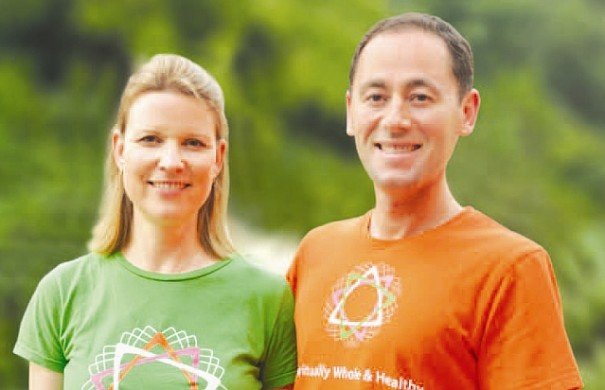 Carolin & Alexander Toskar are based in the Swiss city of Zurich. They are frequent visitors to Thailand, and on their visits they provide their followers with spiritual healing treatments and also share their healing method of ‘Divine Straightening’.

It is Carolin & Alexander’s mission to support people all around the world, to align their spirit and create access to their souls, that they might recognise love, happiness and thankfulness within everyday life and face all experiences with strength, serenity and dignity. 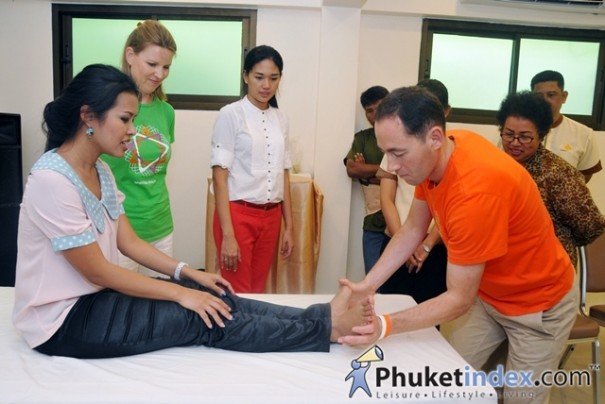 Alexander was first introduced to Divine Straightening by his father Pjotr Elkunoviz. Having been advised by doctors he would suffer for the rest of his life from the pain of a degenerated spine caused by a shifted pelvis, Pjotr decided to find out about “Spiritual Healing”. Shortly after, he developed a mighty strong energy, now known as Divine Straightening, and was instantly cured. Pjotr has since provided thousands of people with Divine Straightening.

Having been witness to his father’s practicing it is no surprise that Alexander has been engaged with miscellaneous ways of spiritual healing and traditions since early childhood.

His wish for spirituality has never diminished, even when Alexander was successfully working as a designer in the advertisement industry. During this time, due to life circumstances, Alexander made several long trips to India to stay with Sathya Sai Baba, an Indian guru, spiritual figure, mystic, composer, choreographer, poet, author, orator, philanthropist and educator. It was from Sathya that he received the clear vision and message to correct his life and to dedicate his whole strength to the service of others and the healing work.

Today, he continues his father’s healing work and gives healing treatments and delivers lectures worldwide and he is also a frequent guest on Thai television. 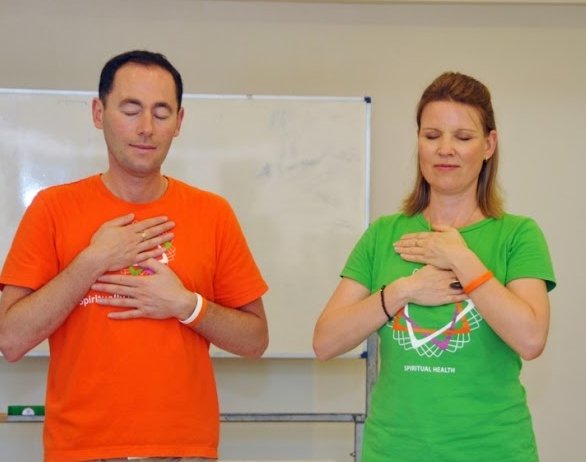 Carolin’s attraction to healing and the way of healing in different cultures materialised when she was studying pharmaceuticals at university and it grew somewhat during her many visits to India, Australia and Thailand.

For seven years she was a Personal Trainer and Coach for a large international company. During this time, she was able to deepen her own spiritual development through regular trips to India´s great Masters and Yogis and more so when training to be a qualified life advisor.

It was when she had her own impressive experience of Divine Straightening from Alexander’s father, that she amplified her deep wish to bring together the different parts of life in a meaningful way to help people even more comprehensively. This she’s been doing in the deep belief that health; vitality and well-being are in every human and can be activated.

This knowledge she is bringing to others in seminars and as author of the book ‘Health as a Path to the Self’.

It was in 2005 in Freiburg Germany that Carolin and Alexander opened their fi rst Healing School and in 2008 the centre for Divine Straightening in Munich, Cologne and Zurich, where they accompany people on their path to health and contentment.

Now, Carolin and Alexander operate together worldwide as spiritual healers and ambassadors for Divine Straightening and the Spiritual Health Foundation. It is their aim to succeed in bringing this special healing work to the world and that it can become accessible to many of thousands of people in Europe and abroad.

Due to regular healing travels, through their books (published in German, English and Thai), regular publications in journals, the new DVD documentary on Divine Straightening, and many testimonials they have are certainly starting to meet their aim of healing worldwide.

For 7 year now they have work closely with the Ministry of Public Health in Thailand. They were initially invited by the director for alternative medicine to visit hospitals and to give lectures and trainings to physicians and nurses, and they continue to do so on a regular basis. 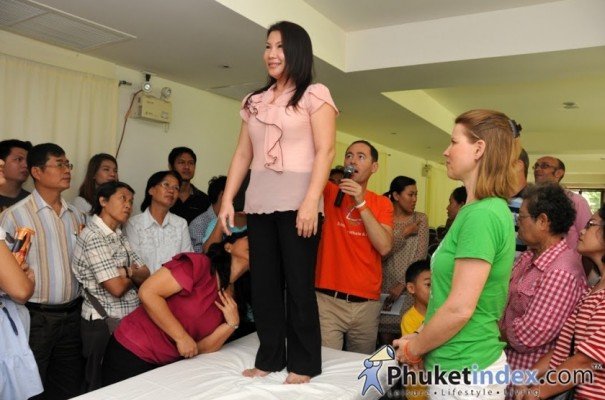 Although they travel extensively, Carolin and Alexander see no difference in how people react to their methods of healing. Although Europeans are much more skeptical, they can still be converted into believers, which to Carolin and Alexander is all part of their process. In fact, there was a recent publication about the couple in a London newspaper, and although some readers were not in the slightest spiritually minded, they knew what issues they had with themselves and what the benefits would be of ‘Divine Straightening’. A number of the article’s readers took one hour away from their businesses and attended the seminar which Carolin and Alexander were holding. They were put through the healing process and taught about self healing and left the seminar feeling completely different people.

Carolin and Alexander believe everybody they see benefi ts in one way or another from their healing methods, and are always touched when they receive any kind of positive feedback, there are still some scenarios which really stick in their mind.

For Alexander he remembers a couple who come to see them who were in the process of separating, after receiving treatment they realised they should be staying together, in fact they later became parents.

He also remembers visiting Breast Cancer Haven in London, one of the organizations supported by their Spiritual Health Foundation, and although they do not promise they can cure people of this illness, they do believe after their healing is performed sufferers can be a lot more comfortable with their lives and people can be a lot more positive about their situation. The feedback they received after their visit was very positive.

For Carolin, although she appreciates any form of feedback about healings of the physical body, she is very much touched when it involves increasing levels of peoples joy and ease of life. 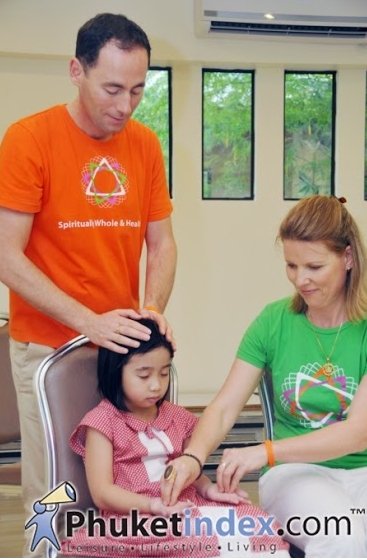 The Spiritual Health Foundation, established in 2010, is a non-profit organization with a mission to develop and promote spiritual healing and wellbeing for children and dependent people.

All of the foundation’s projects are voluntarily supervised by Carolin and Alexander.

The foundation was set up to support dependent people not only financially but also spiritually. Carolin and Alexander always try to combine financial support with turning up at their projects and providing treatments and teachings. They often visit orphanages and see children who are suffering with illnesses or a severe disease. They also visit projects where adults are suffering with life threatening illnesses such as breast cancer and it is at these projects where they really try to spread not only their knowledge and their gift, but also the proceeds raised from the foundation.

It is not the foundations aim to heal the world; however, Carolin and Alexander want to try to include all the people they know either from providing them with treatments, or people whom they have met on their travels, into the idea of spiritual health and to teach them that everybody can contribute and bring something into it.

Being focused on spirituality, it is important that they are regularly present at their projects. They are not a foundation that just hands over money to the projects they support, or do not know, they support projects that support their ideas and beliefs.

The connections they make for the foundation only happen by chance and they do not select people purely because they
want to meet them. It is just by chance they have met people who have been involved with projects and after visiting them have decide it is something which the Spiritual Health Foundation would support.

There is one project the foundation supports, Breast Cancer Haven in the UK, and it was in Thailand that Carolin and
Alexander met the founder.

There were also two musicians they met, also in Thailand, who have a foundation in Los Angeles which supports soldiers
involved in the war in Iraq. One of the musicians lost an arm in a car accident and after experiencing Carolin and Alexander’s treatment invited them to LA to carry out a healing session on the soldiers supported by their project.

At the end of every year Carolin and Alexander travel to Asia, an area of which they are very attached, to carry out charity work as a way of way of saying thank you for the gift which they have been given.

In their opinion, Asia is so much easier when it comes to getting in contact and involved with other foundations and projects and to make charity spiritual healing events. They believe the idea of doing charity work within Buddhist cultures is very much alive, this being the reason it is so much easier.

Carolin and Alexander visit the projects their foundation supports at least once a year, those which are more close to their home are visited possibly up to four times a year. In the time working together with the projects they have seen a great deal of emotional change within the people they have provided treatments. They realise they do not always have a cure for a number of the people they treat, but they can make life changing differences for them. 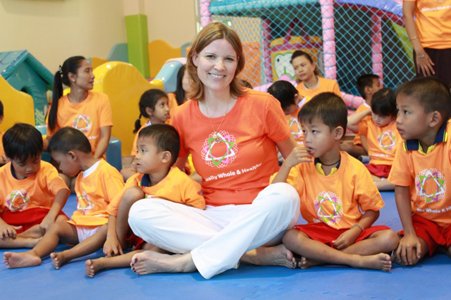 Many people believe it hard to be involved with the projects they support, such as Breast Cancer Haven, due to the emotional attachment involved. However, Carolin and Alexander’s approach is fi rstly they may be able to be of help to the people they meet, and that it is never too late. They see a lot of self contentment within these people who are suffering and see a lot of positive growth after they provide them with treatments.

The foundation, although only having been set up 2 and a half years ago, now has a small group of regular projects which it supports including Pattaya Orphanage and Child Protection Center, Breast Cancer Haven, London, and others. It is the goal of the foundation to support at least one project in each of the countries Carolin and Alexander visit on a regular basis.

They still want to spread their support a little more but they realise they are a small foundation and cannot support an ever increasing number of projects.

When it comes to raising funds for the foundation, 100% of proceeds from any of the couple’s English language books go straight into the foundations funds, along with funds raised at their spiritual healing group sessions and money donated by people who have received treatments from them. Furthermore, all proceeds raised from the selling of their ‘do good, feel good’ t-shirts go to non-profit organizations in Thailand.

When it comes to the hopes of Carolin and Alexander for the future of the foundation, they simply want to continue spreading their motto of ”Do Good, Feel Good”, and they hope they can continue to inspire people to help others.

They believe once you have experienced pleasure, such as that as when you have helped somebody, you will become instantly addicted and will want to continue to have this memorable experience.

For more information about Carolin and Alexander’s ‘Divine Straightening’ healing method or about the foundation please visit: www.divine-straightening.com or www.spiritual-health-foundation.org