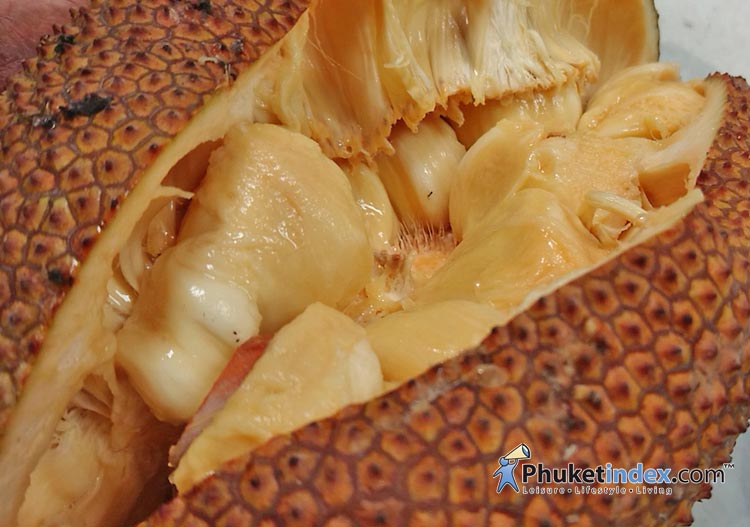 Cempedak is known as champada in Thai. Artocarpus integers are known as cempedak or chempedak.

It’s a tree belonging to the Moraceae family, in the same genus as breadfruit and jackfruit.

Cempedak or champada in Thai, is a tree with opaque rubber, glossy leaves, and yellowish-brown wood that is used to produce furniture, shipbuilding, and rope.

Cempedak/Champada is a smaller version of jackfruit. The peel of the raw fruit is hard and contains a lot of rubber; however, as the fruit ripens, the peel becomes softer and contains less rubber, and the ripe fruit has a very powerful aroma and a very sweet taste.

One Cempedak/Champada includes numerous little units inside, each of which contains one seed and is linked to the fruit’s core. Cempedak/Champada has a strong, long-lasting odour that is more powerful than that of the jackfruit. But, unlike the fragrance of jackfruit, I don’t think it makes me dizzy.

The Cempedak/Champada fruit is often consumed both raw and cooked as fried bananas (the seeds can be eaten when cooked). People also use it in cooking dishes, particularly in southern Thai cuisine like Tai-Pla Curry.

What’s the best way to eat Cempedak/Champada? It’s easier to eat than jackfruit. Just cut it in from the top to the bottom and open it with your hand. It is recommended that you coat the knife with vegetable oil so that it is easy to clean and the rubber does not stick to it.

Choosing Cempedak/Champada is entirely dependent on your luck, as to whether it has been dissected and how many insides there will be. As a result, there is a saying that “purchasing Champada is like buying a lottery ticket,” as it sometimes comes out with only three insides. But that’s fine because Cempedak/Champada isn’t expensive.