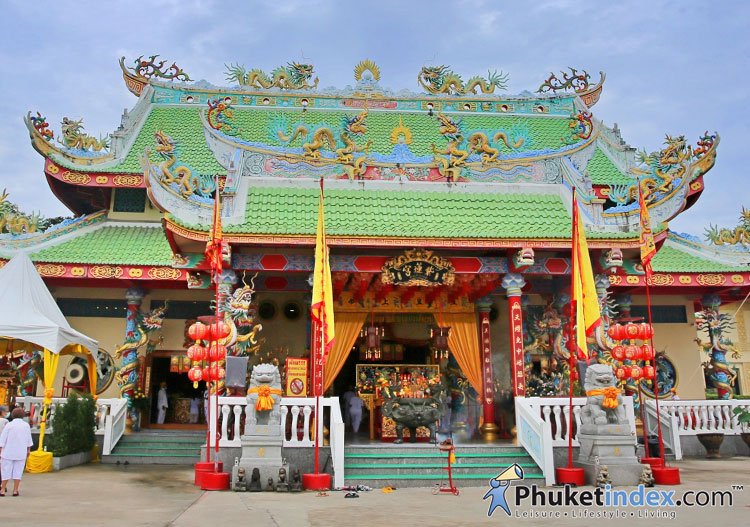 Guan Au (Guan Yu) Shrine at Baan Na Bon, this is a more than a hundred-year-old shrine with a long history.

At present, people build a new building covering the old building which damaged. It is a local shrine of Baan Nabon, Chalong Sub-district, Muang Phuket.

We shoot a set of photos for this travel guide article in the period of the Phuket Vegetarian Festival, the tradition of eating vegetables in Phuket. So there were a lot of people coming to the shrine to join the activities. What can be observed and different is at this shrine, there is a campaign not to burn incense sticks, to reduce the air pollution problem. And during the vegetarian festival, anyone who wants to be inside the shrine, they must wear all white clothes. And don’t worry if you have not put it, they provide some to borrow.

This shrine is one of Phuket’s more than a hundred years old shrine. The original people in the area said that in the past, this place was a canal connected to the sea. There was a Chinese man get a junk ship from China to Phuket, and brought an image of Guan Yu with him, to worship, as a fortune, because Guan Yu considered a god of honesty and power. When he arrived at Phuket, this Chinese man has built a small house and set a corner as a place to worship the god Guan Yu that he brought with him.

Later, this Chinese man disappeared, people found only his Guan Yu image. Neighborhood villagers heard the news about Guan Yu’s image and start came here to pay respect to the god, some of them came to ask for luck, healthy, and more. Most of them were successful as they ask for, thus becoming more and more faithful every day.

There were many believers, so people plan to build a shrine. The building built in a brick-and-mortar style, approximately 1 meter high, and a wooden thatched rooftop, enshrined the god Guan Yu inside.

Shortly after, there was a miracle that happened inside the shrine. People found anthill occurring in four directions around the worship table of Guan Yu’s image and one in the middle. (The anthill in the middle has permission to remove because it is dangerous to the building structure, and has been simulated according to the pattern that the god tell) And surprisingly, termites don’t gnaw on any wooden parts of the shrine.

In 2009 during the Phuket Vegetarian Festival, People got authorized by god to create a new building to replace the original shrine which not suitable for the shrine’s activities. So they built a new shrine in the same location, cover the old one. On 20th January 2010, there was a ceremony of started building the new shrine with a budget of 30 million baht. And took 3 years to complete, the opening ceremony of a new shrine held in 2013.

Guan Yu’s image at this shrine is so respected by the villager, most people who ask for help are successful.

The five anthills in the shrine (four corners and one in the middle)
This place isn’t allowed to bring and burn an incense stick, only three incense sticks on each table by the staff.

The important god of this shrine, chief of gods is “Guan Yu”. Every year on Guan Yu Day, he will come to receive worship from the villagers, solve their issue, and dispel their pain or their illness.

Normally, along the year, the villagers often come to pray and ask for help from the god too. And they always received mercy from the god Guan Yun, always successful. So the god and this shrine are continuing respect from generation to generation until now.

Inside the shrine, there are carved images of Guan Yu and his close confidant gods, Guan Ping and Zhou Cang.

Guan Au (Guan Yu) Shrine at Baan Na Bon is located in Muang Phuket at Baan Nabon. From Phuket-Town turn left at a traffic light, at the three-junction before Palai Intersection. The landmark is a sign at the entrance.