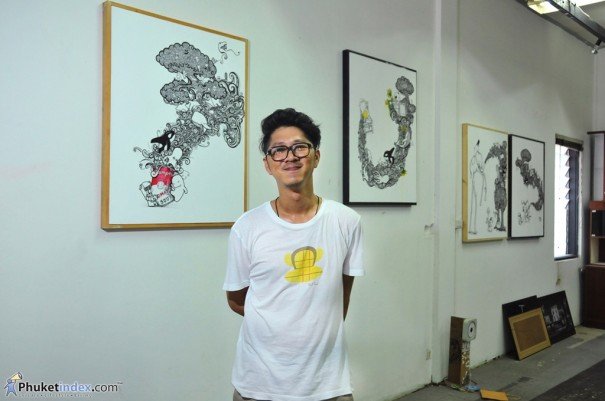 Let us introduce you to Isara Thaothong, known to his friends and family as Id, and known in the art world as ids8.

When I first contacted Id about conducting an interview, I asked how he would describe his work, “I think in English it’s easiest to describe as doodling” was his reply.  Surprising, considering after many changes in courses at Bangkok’s Rangsit University he came out with a degree in fine arts.

Sure, his doodles, which range in size from post cards to canvases of over 2 x 2 meters, as well as wall murals which can stretch up to 8 meters in length, are not for everyone, but if it if you like it, you like it a  lot, immediately!

So let’s find out more about Bangkok born Id, his rather impressive doodles, and little Peepho, the character featured in most of his work.

What are your earliest art memories?
This would have been when I was 8 years old, my older brother asked me to do some drawings with him copying cartoons from our comic books. This was during our summer holidays, and for me it was so much fun, more fun for me than him I believe.

When did all of this doodling begin?
It really started when I learnt more about art. I started by learning about Traditional Thai art, but for me it wasn’t that interesting, so I started to make up my own designs based on traditional Thai art which I suppose you could call doodles. When I did it in my own style it was a lot easier than trying to do it in the traditional way. I suppose I was around 15 at this time. 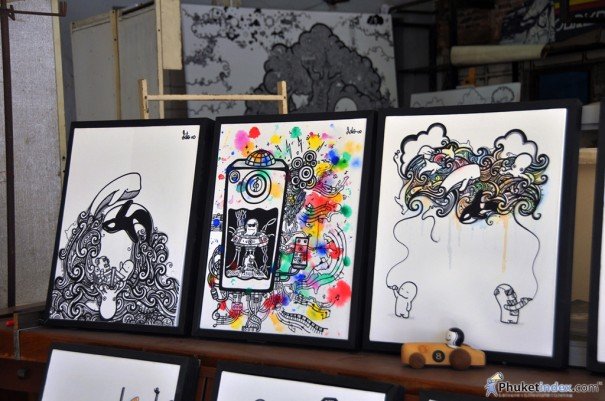 How time goes into your trademark doodle style pieces?
That all really depends on the size of each piece. If I do a small piece it will take me about a day to get the sketch down on paper. If I’m happy with the sketch, I will transfer that to canvass, that will be another day’s work. However, if I do a larger piece it can take anywhere from 3 – 7 days to sketch it, and a lot longer to get it to canvass.

What are you currently working on?
I’m actually taking a break right now from drawing my own individual pieces as I’ve been working very hard for the last year on 5 new pieces for my exhibition, the IDZENJEK+AO Project, which is being held at my studio, the Drawing Room Gallery until 19th April 2014. However, I can’t really say I’m taking a break because I’m working on a commissioned piece at present which I still have to complete. This is a large piece of wall art, stretching a length of over 8 meters, and 2 meters high, that I’m doing at a new hotel in Patong called The Crib. 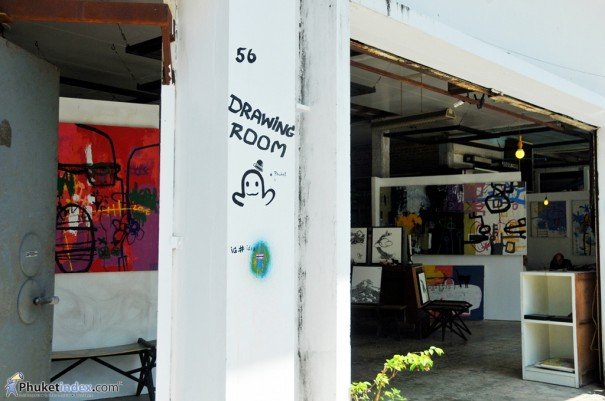 You’re quite well known for drawing on walls, did you draw on the wall at home when you were younger?
Yes I did draw on the walls at home, but more than often it was behind closed doors, and at the time nobody knew what I was doing. Sometimes I would be in my room and have a colour in my hand, and something would come into my mind and I just had to start drawing. Quite often my mum would come into the room when I was in the middle of drawing and ask what I was doing, but I really didn’t have to explain as she could clearly see what I was doing, but she would just close the door and let me carry on.  Maybe she was actually angry at me, but she never let me know it. 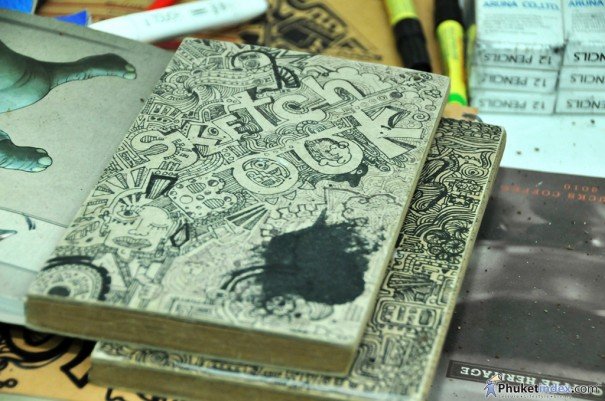 Your pieces always feature one particular character, can you tell us about him?
This character I first drew when I was 12 years old, but he’s actually changed quite a lot since I first drew him. His name’s Peepho, because he peeps around the edges of my drawings. When I first started drawing Peepho the sketches were really quite simple, but today they are far more detailed and he can be found in a variety of settings, he can be a DJ, a footballer, a surfer, whatever I want him to be, or should I say whatever my dreams want him to be. And so that Peepho doesn’t get lonely, now he also has a friend Moi the robot, and if you know French, you will know that Moi is me, ids8, so now Peepho and Moi go on our adventures together. 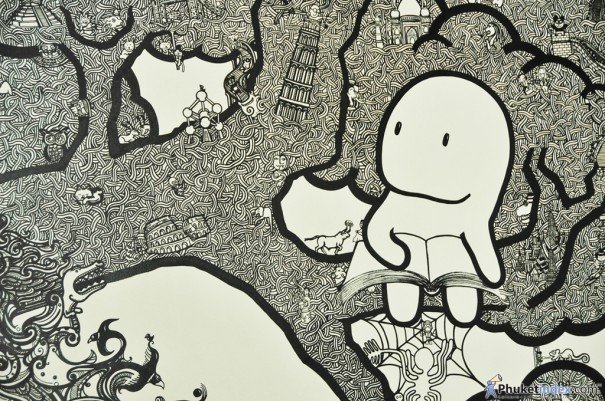 Do you know when your work is finished or are you constantly tweaking?
I have to admit that the work I’m selling in the gallery does get the occasional tweak. My pieces always start with a certain story, and I think that it’s complete. However, when it’s on show in the gallery, sometime I will walk past it and think that something’s missing or the story is incomplete, so maybe I’ll add a tiger here or another animal over there, then it’s complete! If you come and look at my art today you will see it as it is now, but if you come back tomorrow it may well be different.

As an artist you obviously have to sell pieces, who are your buyers?
Mostly foreigners both expats and tourists, I think that this kind of art is far more appealing to them than to Thais. I’m not saying that Thai people aren’t interested in my art, because many Thais come to view my gallery, but in the years I’ve been selling my work here in Phuket I would say no more than 20 Thais have bought anything. 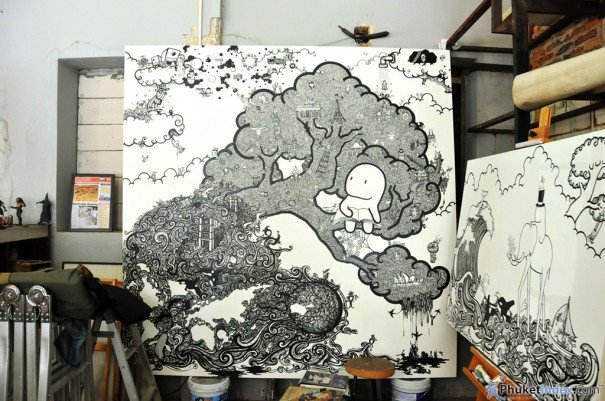 You recently started doodling on skateboards, how did that idea come about?
When I was young I played a lot on skateboards, and I liked to look at the artwork that was on the underside of the board. I just thought what if I done some of my art on a skateboard, what would the reaction be? The idea was really just a bit of fun, but I sold all 6 skateboards within the space of a few days. I don’t know if people bought them to use or to hang on their walls, but I don’t mind, they bought it so they can do with it as they please.

In your wildest dreams, where are you going to be in 5 years?
This is already my dream, every artist dreams of having a gallery, to sell their work, and to put on an exhibition, and I’m doing that now. So now I’m actually awake in my dream! 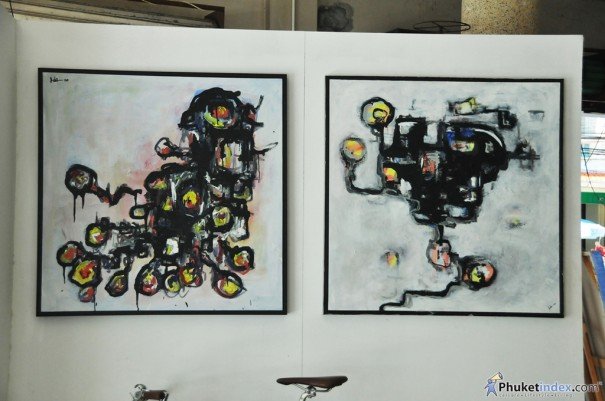 Previous Post Cape Panwa – A very different side to Phuket