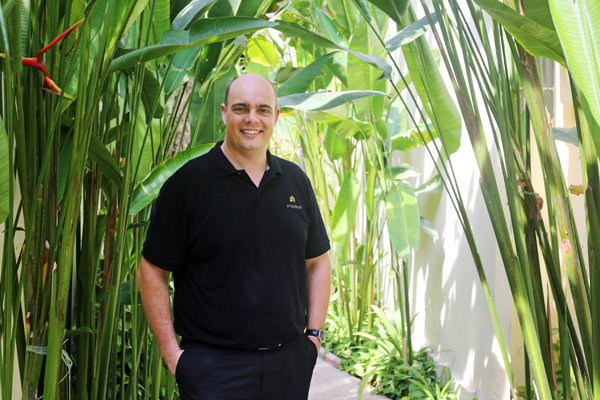 In January 2016, Doeke Bonga took the opportunity to challenge himself by taking on the post of General Manager at Impiana Resort Patong and Impiana Private Villas in Kata Noi. It’s his fi rst time with the Malaysian Hotel Group, Impiana, and he’s brought with him extensive experience in hotel management, having worked with several hotel chains and groups around Phuket and elsewhere.

General Manager Doeke, originally from the Netherlands, has a degree in hotel management from his home country. After his internships back in 1989 and 2002, he decided to come back to Phuket in 2003 where he gained his hotel industry experience and since then has never left Thailand.

“I decided to come to Thailand in 2003 as the Assistant Front Offi ce Manager for Kata Beach Resort and, aged 27, I quickly got the opportunity to grow as I accepted the post as Hotel Manager at Karon Beach Resort which is now Beyond Karon.”

GM Doeke also had other experiences with many hotels in and around Phuket such as the Ramada Khao Lak, The Pavilions, Bel Air Panwa and several other hotels, mostly in the south of Thailand. “In between, I was even an IT manager for a property management company for a year,” he says. GM Doeke revealed that around October last year he was looking for a new challenge after he had helped open the Sheraton Samui and that Impiana Hotel was looking for someone to manage their property. “I came here in January and am very happy at Impiana,” he says.

Talking about his role here, “I share my time between both properties, Impiana Patong and the Private Villas in Kata Noi managing sales and marketing, the daily operations, and ensuring that the guests are happy when staying with us. “It’s my job to make the operation run smoothly and to improve the hotel.”

“For me the objective here is to try to increase our team spirit.” He is now trying to improve people’s capabilities, to teach employees to be good at multiple tasks rather than just specialise in one. Cross training and cross exposure therefore is the best strategy to achieve this goal.

“I encourage people to do more so we can get more things done with the same amount of people. So basically we’re looking to invest more in the team. We develop, we train, so that staff members can do a better job and serve our guests better.”

As for 2016, GM Doeke is looking to help the business grow and to make it even better. “We’re looking at a very good year so far so we’re continuing to build on that and to make the staff happier.

In the past couple of months, the hotel has performed great on TripAdvisor, the world’s largest travel site providing reviews of travel-related content.

“We rose quite significantly from 54th to 24th placing in their ratings so we plan to continue to push on and to constantly improve,” revealed the GM about his target.

GM Doeke is originally from the Netherlands now he’s building a home with his family in Phuket. He has a Thai wife and two young kids with whom he spends most of his time after work. “When they are not on their computer I prefer to take them out and do things together, go to nice restaurants and chill out. I do some sports every now and then, hang out with friends sometimes. “It is a relaxing local island lifestyle basically,” he says.