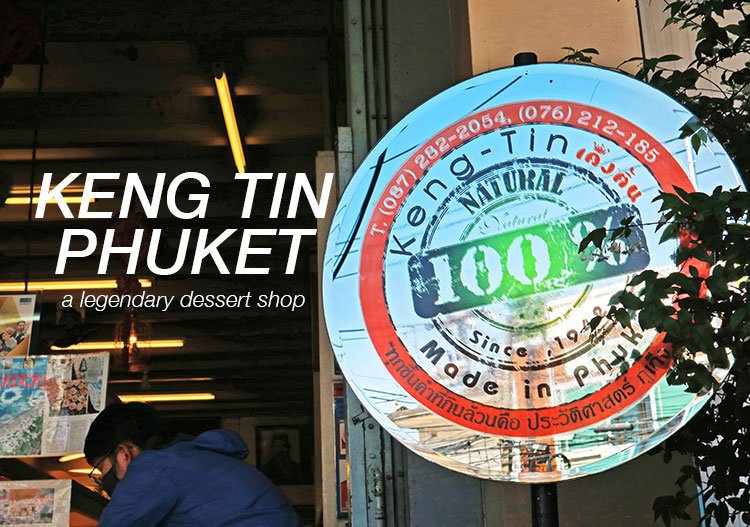 Visiting Phuket besides the sea, I would like to recommend everyone to visit the Old Phuket Town, to learn about the culture and identity of Phuket. One of Phuket’s cultures is a gastronomic culture. And I would like to introduce a Phuket legendary dessert store, it is “Keng Tin Phuket”. Keng Tin is a well-known dessert shop in Phuket. As a long-established shop and factory that makes a variety of desserts, wholesale and retail stores, located on Phuket Road (near Bang Neaw Intersection)

Various ancient Phuket desserts can be found at the Keng Tin shop. As for taste like before 100 years ago, it’s still the same. The shop also provides a new style snack, that has adapted to suit the new generation taste. It is Tao Sor with new filling such as purple sweet potato and Oh Nee Ginkgo. But not sale at every day, not a bit lot, because they don’t add preservatives, these new recipes can keep only 3 days (the original recipes, they will be 7-10 days)

When you come to Keng Tin, I recommend the original recipe salty Tao Sor and sweet Tao Sor. The original is in an orange package and a white package. I usually eat it with hot coffee or hot tea, really delicious.

I also have some Chinese desserts to recommend, the original recipe, let’s see.

Mor Law is a Chinese dessert that is hard to make, about 7 days in the making. They don’t use baking powder, they use taro powder instead, ancient knowledge.

Pang Pia, or now it has another name, mom’s dessert. Because it is a popular snack to buy for mothers after giving birth, for Phuket people. A simple way to eat that most of Phuketian know, make a hole and drop the egg inside, then fry or bake it, very delicious.

Kong Taeng or Tubtap, I personally like this one a lot, I can eat a lot with hot coffee or hot tea.

Bee Pang, a dessert with a sweet taste. Some people may have eaten crispy but really traditional style it isn’t crispy, because it is soaked in sugar.

And also have stories that relate between dessert and Phuket culture. Including the character of the Phuket people and their traditional culture. We have a video interview with Khun Vipada Tongpinyochai, the third-generation heir of Keng Tin Phuket, let’s watch it.