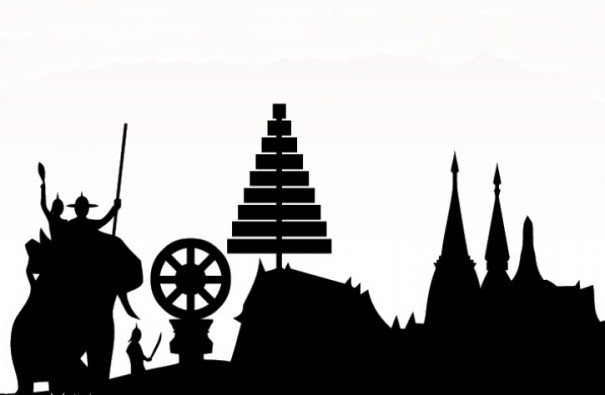 Well known Thai composer, songwriter and arranger Pongprom Snitwong Na Ayuthaya decided to extend his birthday greetings to His Majesty the King with a “music and art” project, entitled “Nitarn Pandin” (“The Chronicle of the Land”).

Pongprom had planned to come out with this work to mark the King’s 84th birthday anniversary last year but because of the severe flooding postponed the project.

The project is made up of two parts. The first being a song entitled “Nitarn Pandin”, which narrates the meaning of “king” or “raja” in different eras and features lyrics in ancient languages.

Pongprom said “I am very proud to unveil these historical art pieces inspired by H.M. the King’s devotion to his subjects and the Kingdom. We hope all 9 Land Art locations will be visited by art lovers and travellers, so all can see just why “Miracle Thailand” is an amazing land for all to enjoy”

“My aim is for everyone to be happy with what they are doing for the King, just as the King does so much for us. Our budget was insufficient at just Bt8 million but the project has still gone ahead because I believe in miracles,” he said.

In addition to the music and art, “Nitarn Pandin” is also an app on iPhone – iPad, allowing everyone to learn about the royal projects and contribute towards the land art. Simply select the location, add to the installation then share it on Facebook.

The Chronicle of the Land No.1

Nopadon has employed 1,999 yellow hay stacks to form the Thai number ‘9’ which is 399 metres long and 109 metres wide. Following the exhibition, these hay stacks can be used to cover the bases of palm oil trees, which will be used to produce alternative energy in the future. Nopadon has also created a permanent shrine with a portrait of H.M. the King shaped in a Pho tree leaf surrounded by Pho tree leaf bells to contribute to the peaceful ambience of the site. 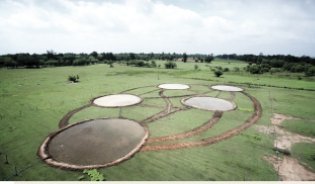 The Chronicle of the Land No.2

As a reflection of His Majesty’s Sufficiency Economy philosophy, which emphasises close community ties, Sakarin has divided a large rice paddy area into 5 smaller fields of 1.2 metres each. Shaped in circles, their diameters range from 50-70 metres and all are intertwined (much like the Olympic rings). Each is then planted with a total of 200,000 rice plants and sugar cane, which in the future can be harvested for local consumption.

The Chronicle of the Land No.3 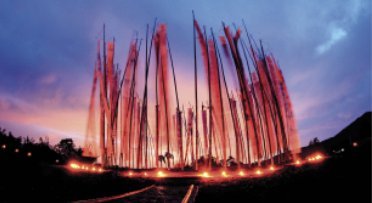 Thongchai feels that fertile soil is vital. Therefore, Inspired by H.M The King’s Royal Soil and Water Project, he has created a work of art by digging a moat which can feed the land with water. The work represents His Majesty’s concern for Thai farmers as well as all his subjects with the rings symbolising Thai unity. Moreover, Thongchai uses the ancient Lanna flag as a sign of people’s devotion towards His Majesty. The 84 flags celebrate H.M. the king’s 84 golden years with smaller flags representing the people flying above the centre of the ring binding all together, the monarchy, the people, and the kingdom. 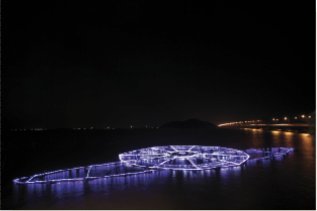 The Chronicle of the Land No.4

Amrit has created a Chaipattana Windmill replica with a diameter of 40 metres by linking thousands of light bulbs to outline its shape and cast light on Songkhla Lake. This piece was inspired by His Majesty’s composition,”The Chronicle of The Land” and offers a beautiful sight to mark the end of the day tranquility of the night.

The Chronicle of the Land No.5

To create a better understanding of “Sufficiency Economy”, Asst. Prof. Pairoj has created his art piece using 7,000 mangrove seedlings to form a circle of dew drop shapes on a 15.8 acre coastal plot that forms part of the 4,745 acre Baan Pred Mangrove Forest, ranking second in Thailand and twenty-sixth in the world for size and ecology.

The Chronicle of the Land No.6 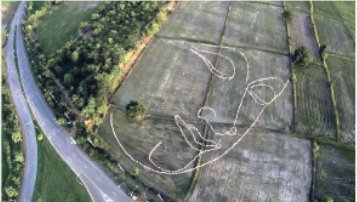 Panya has created an impressive work of art on a 3.5 acre paddy field at Jaegun Junction on National Highway 12, to pay homage to H.M. The King. The structures for 1,200 scarecrows have been placed on this field and the public is invited to join Panya in creating this work by donating clothes to dress these figures. 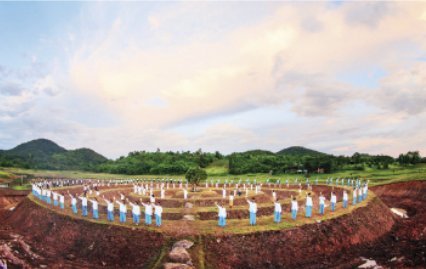 The Chronicle of the Land No.7

Inspired by the “Phra Mahachanok” story, Suriya has created an art piece on a mound in Chern Tawan Dhamma Centre, Wat Pa Vimuttayalaya, Chiang Rai. Seven 80 metre rings circling a Pho tree, which symbolises Phra Mahachanok, are fed with water to symbolize the seven days he swam in the sea. For those who come to view this Land Art, they are able to meditate by walking around the art piece.

The Chronicle of the Land No.8 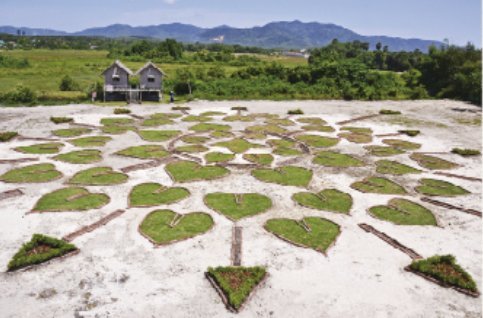 Inspired by the prestige of His Majesty the King that is spread everywhere in Thailand, Tawee has created an art piece in a compass–like shape, consisting of Pho leaves pointing outward in many directions. The Pho leaf is a heart–shaped leaf which represents Dhamma and the Virtues of the King. It reflects his royal speech “We shall reign with the righteousness for the welfare of Siamese”.

The Chronicle of the Land No.9 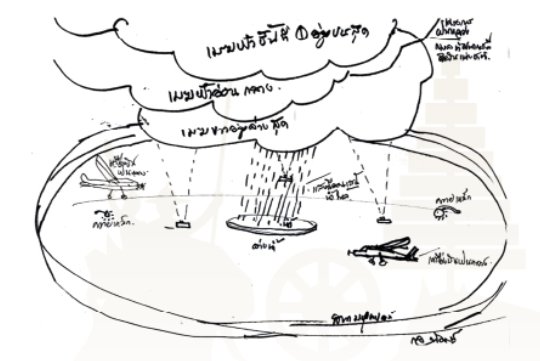 Inspired by H.M. the King’s Royal Rainmaking Project, the last great art work was created by Kamol by combining clouds on canvas above moving neon lights that depict rain drops falling from the sky. Kamol also buried a projector to create an atmosphere of light, colour, sound, and grace, as well retelling the stories of Royal Projects, here on the grounds of the 11th Infantry Regiment.

The Chronicle of the Land No.8 – Artist Profile 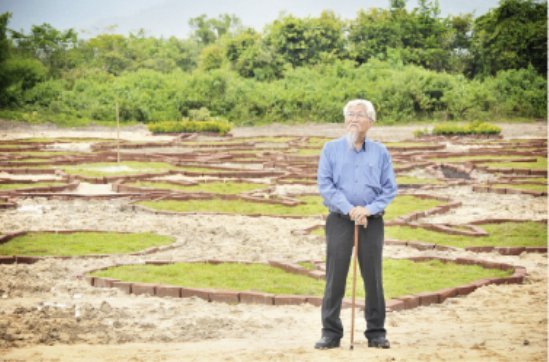 Awarded National Artist status in 2005, 77-year-old veteran artist Tawee Ratchaneekorn has been one of Thailand’s most idiosyncratic creators for over 50 years. A versatile artist known best for his painting, but who has also worked in drawing, print, mixed media, and sculpture, Tawee is recognised for his raw, expressive, socially critical interpretations of the modernising face of Thai society.

In recognition of his service to local art, Silpakorn University is exhibiting over 200 works by the retired lecturer. Under the subtitle “Society, Sins and Hell,” the exhibition is rich with the artist’s familiar crude caricatures of the human condition, often intersected with menacing bestial metaphors. 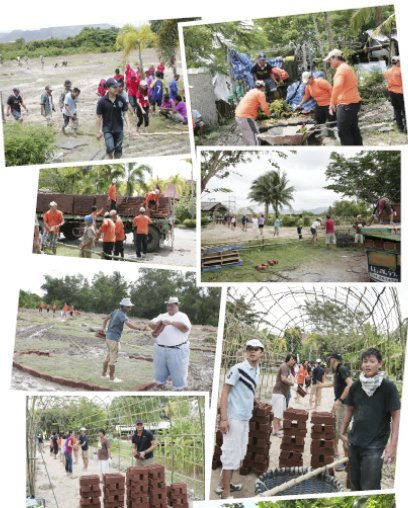 Being a resort that prides itself on being a true Thai cultural retreat, which offers its guests a stay in a replica Thai village, where everything on offers is truly Thai, At Panta Phuket Resort and their team could not resist the invitation to take part in creating and exhibiting a piece of ‘Land Art’ that would be part of the iconic ‘The Chronicle of the Land’ project.

The management team of At Panta managed to gather a group of around 200 volunteers, made up of resort staff, TV representatives, local teachers and school children, members of rescue foundations, staff from AirAsia and local business people, who worked tirelessly in creating this amazing piece of ‘Land Art’ over the duration of two days.

Sojirat Sibunruang – ThaiPBS TV Producer – “I think this Land Art is a new attraction place for Thai and foreigner travelers. This really shows original Thai culture and represents His Majesty King Bhumibol’s genius to give knowledge for development of many modern ideas, particularly in the field of modern science and public life. The role of the monarch is deeply ingrained in Thai life and the people of Thailand know that their King loves them.”

Teerapong Soyson – Baan Bang Tao School Teacher – “I’m so proud to be part of this amazing project ‘The Chronicle of the Land’. I found out about the idea via a media channel and I felt that I wanted to help in my community. One of the most important things we do in our school is to teach children about social responsibility, and I always tell my students that anyone can build a good society, and that’s why I’m so glad to be here.”

Manassawee Aeamtanwong – Baan Bang Tao Student – “I love The King and love my home town! This is a great fun activity for me and my friends. I hope everyone will come and visit and are as impressed with the land art as me. I have invited a lot of my family from other provinces to visit here, welcome to Phuket Ka!”

Wassana Junphutsa – Kajornkiat School Teacher – “This is one of the biggest things that’s happened in Phuket and the incredible land art has been created by the skill of a Thai national artist. We don’t only have beaches for travel but we also have a land of true natural beauty. I would recommend some get togethers at the newest viewpoint of Phuket.”