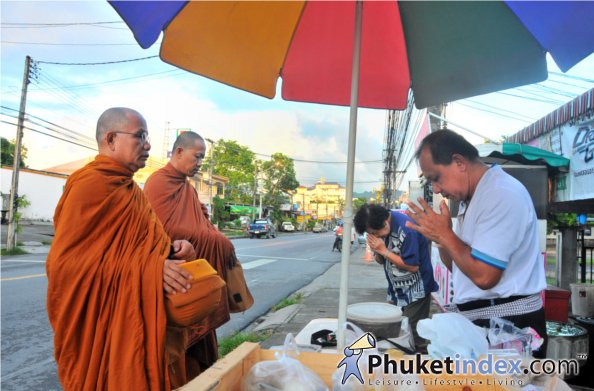 In Theravada Buddhist societies, every morning at around 6am, monks gather their alms bowls and drums are beaten to wake local people to notify them the monks are coming. The monks then walk through their neighborhood collecting the food they will eat for the day.

“The act of giving alms to monks has been practiced by Buddhists for thousands of years. It’s associated with Buddhists belief that doing good things will bring peace and happiness to their lives.

There are many ways in which Buddhists can make merit and these include giving alms, living life according to Buddha’s teachings and praying.

Alms giving is a common practice and is usually done at the break of dawn, when Buddhist monks begin their alms rounds. Locals will prepare food, or have water, and wait for the monks to approach them with their alms bowls.

It is important to note, women are prohibited from any physical contact with a monk -regardless of her age, nationality or religion. All female alms donors must take care not to touch a monk when she is offering food to him.

Once the food or water has been placed inside the bowl, the monk will place the lid back on his alms bowl and recite a prayer as a blessing to his donor, after which the merit-making will be considered as officially over.

Buddhists give alms for a number of reasons; one example is in honour of deceased loved ones, the belief is they will not have to suffer from famine in the afterlife.

The common rule when making merit is to ensure the mind is purified. Only after that state has been accomplished will the Buddhist proverb ‘do good and good will come unto you’ ring true.”

Buddhists offer alms to monks so they can sustain themselves. At the same time, it’s also a way to practice giving and letting go.

When a monk has food to nourish his body and mind, he will have energy to go about his day. The main duties are studying, spreading Buddha’s teachings and practicing meditation to purify the mind.

Meditation is a combination of mindfulness and concentration. Regular practice leads to wisdom. After years of practice, the monks share their understanding with the community, which is looking for guidelines on how to lead a happy and peaceful life.

Thai Buddhists believe in rebirth, which means the spirit lives on after the body has died. After the spirit has left the human body, it’s instantly reborn into another living form – as a human being, animal or angel, for example.

Thai Buddhists often offer food to monks after a family member or friend has passed away because they believe their spirits receive the food. As a result, many people offer food their loved ones liked.

In addition, most Thai Buddhists make a wish before offering food to monks. Many Thais also wish for wealth, good health & happiness.

How to Benefit From Alms Giving

It’s important to have good intentions whenever you offer alms, and the money put towards alms giving should be earned in an honest way.

In order to benefit the most from alms giving, the donor should be joyful before, during and after the offering.

Always give alms of your own free will. It’s not important how much you offer, it’s your intentions that matter.

Only offer what you’re able to give and feel comfortable with. Certain people give in to social pressures and end up offering more than they really can afford – this won’t do you any good.

Next Post The best place to get close to nature