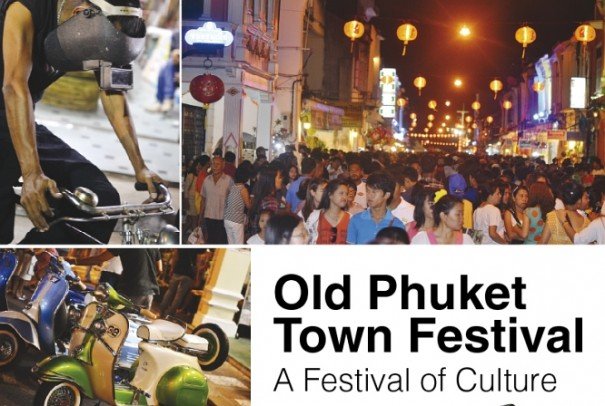 Phuket has a long history of multi-racial culture and there are many examples of this to be found in various spots around the island, and there is one annual event that really brings out the best of the cultures that has made Phuket what it is today.

Phuket’s first “Old Phuket Town Festival” was organised in 1998 and has grown ever since with cooperation from the Phuket City Municipality, Tourism Authority of Thailand (TAT) Phuket Office, Peranakan Association, Old Town Phuket community and Phuket Old Town Foundation. The festival now provides a well needed boost for Phuket’s heritage and culture. The festival is a celebration of the old Phuket style and is also an educational insight for those who wish to know more about the colonial days of South East Asia.

There is a unique community in Phuket, namely the ‘Baba’, with its own way of life, language, dress and food. The core of this community was formed by early unions between Hokkien tin-miners and Siamese women. This distinctive ‘Baba’ heritage can be seen in old Phuket town. The festival also showcases the ‘Baba’ lifestyle with cultural parades, performing arts, live music, handmade goods, classic vehicles as well as traditional costumes, local Phuket foods and lots of fun activities. The festival is one of the most important events for local residents, government offices and private businesses to all join together.

There are three main objectives of the festival: to develop and conserve Phuket’s culture, to promote the area, and to encourage all Phuket residents to contribute to the promotion of the Phuket Old Town.

There are four main streets used for the Old Town Festival, each of which has its own individual theme:

Thalang Road is known as Phuket’s ‘historical road’ and is located in Phuket City Municipality. It was formerly the trading center of Phuket and most of the houses located along this road were owned by wealthy Phuket people. The houses were built in Sino-Portuguese styles which reflect unique combinations between Chinese and Portuguese architectures. It is also a good example of how much of a multicultural community the island became since native Thais, Chinese, Muslims, Indians, and Europeans started living together peacefully on the same road.

Krabi Road in the old town area has the Phuket Thai Hua Museum, originally a Chinese school. It features exhibits about the history of Phuket, concentrating particularly on the role Chinese immigrants played in Phuket’s development. The museum is located at one end of Krabi Road.

Phang-Nga Road has the On-On Hotel, Phuket’s oldest hotel established in 1929. The other buildings in this area such as the restaurants, banks and shophouses all have original Sino Portuguese architecture.

Dibuk Road runs directly to the north of Thalang Road and is home to a number of popular eating establishments. This road also features a range of textile and art shops.

During the Old Phuket Town Festival, Thalang Road is closed off to cars and converted into a ‘walking street’, bringing back the ambience of when the old town bustled with pedestrians instead of cars. Entertainment starts at around 3pm daily, and continues through till midnight.

On the last day there are worships and prayers performed by devotees at the Hai Leng Ong open space near Dragon Park. So if you’re there and would like to view a different side of Phuket and its traditions, February is the time to head over to Phuket old town to catch all the action of the festival.