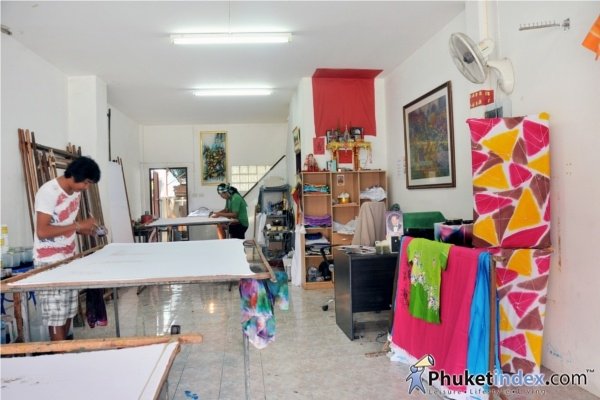 Whilst photographs are the most popular way for people to capture their memories of Phuket’s natural surroundings, be it on land or in the sea, there is another way in which these images are reproduced.

Batik can be seen all around Phuket, most commonly at the beach areas in the form of Sarongs. Whilst many may think these items have been produced in other countries or other provinces of Thailand, it may come as a pleasant surprise that a large percentage of these Batik items to be found here are actually produced in Phuket’s own batik industry.

Batik, although not originally used to display the elaborate scenes we see today, can be traced back as far back as 2000 years.

The origins of batik are unclear; some believe it originates from India, whilst other believe it originates from Indonesia. Evidence of early batik work has been found all over the Middle East, Egypt, Peru, Japan, East Turkistan, Europe, as well as Central Asia (India and China). What is clear is the word Batik is an Indonesian-Malay word which translates to ‘wax writing’ and that is basically what batik is about. 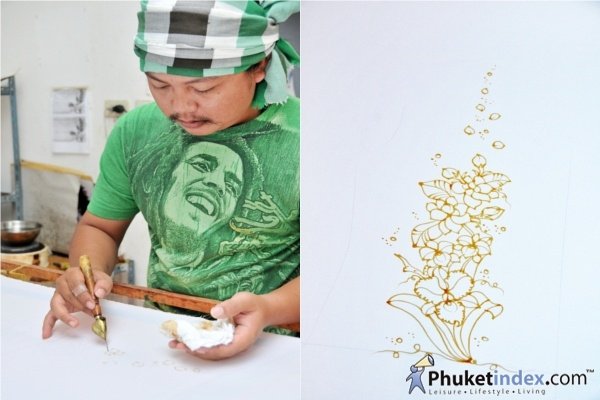 Batik is a crafted fabric that needs to undergo the delicate and repeated process of waxing, dyeing and boiling.

Wax is used as a means of colour blocking in the colouring process. Every section of fabric that will not be touched by colour has to be covered with wax. The un-waxed sections are then dyed in the chosen colour. The wax is then removed by soaking the fabric in boiling water, where it melts and separates from the fibres. The batik is then dried and the whole procedure for each colour is repeated. The more colours a batik fabric has, the more times it goes through the process of applying wax, dyeing, and drying, then removing the wax. The process has to happen in a precise order that will produce the pattern or figures that are desired. Additionally, the order of which colours to apply also has to be followed.

Nowadays, there are a number of tools which have been invented to ease production. Stencils are used allowing patterns to be copied onto the fabric and are used as a guide for wax application. Mass producers of batik use large copper blocks to stamp hot wax designs onto the cloth. 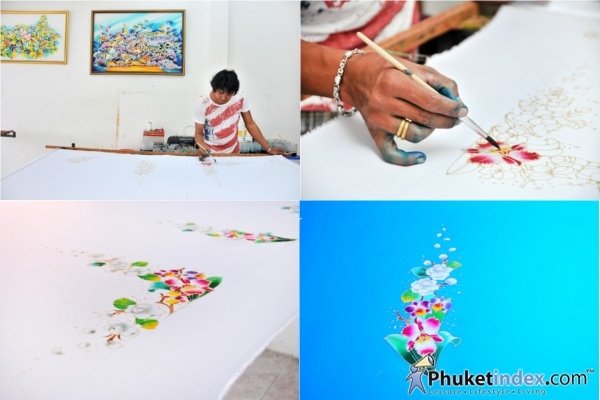 Unlike other producers who use the modern tools to create patterns, Phuket’s colourful designs with bright tropical flowers and marine themes are designed freehand, with artists painting the colours directly onto natural fibres.

The oriental artform is said to have been introduced to Phuket by Adjaan Chuchart Ravichan, a Javanese art instructor, who started to experiment by painting colourful floral and underwater scenes onto cotton.

A student of Adjaan’s, Chai Chansongsang, carried on his legacy, firstly by selling batik on the streets and then by approaching local hotels who agreed to sell his sarongs, shirts and scarves in their gift shops. And so in 1986 Phuket’s Batik industry was born.

Today, the Batik industry involves many local people working in several workshops around the island. These workshops can vary in size from a one of two man show such as Pom’s Batiks featured in our photos, to larger workshops with employees well into double figures. 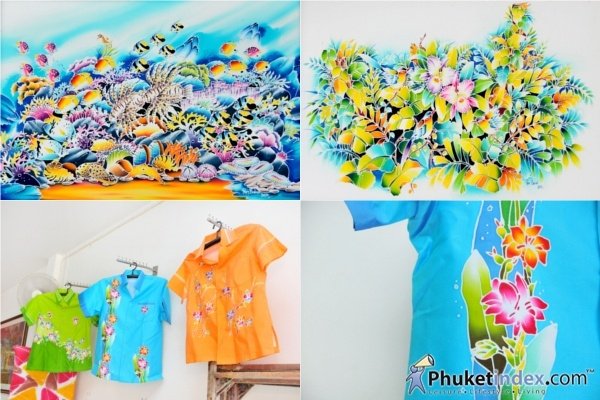 Earlier this year, The Phuket Provincial Industry Office (PPIO) held a seminar to reinforce the continued development and integration of the island’s high-potential Batik industry. The event, held for the second consecutive year aims at developing, improving and integrating Phuket Batik production and preserving Phuket Batik as an important element of the Phuket’s cultural heritage.