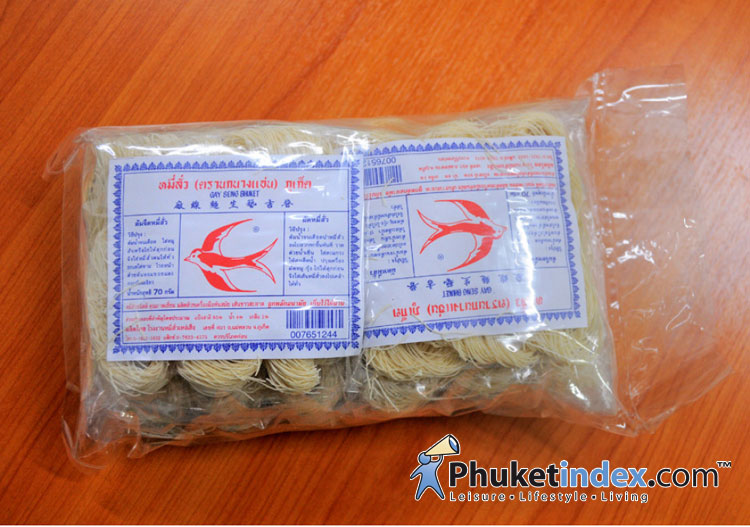 How to cook Mee Suah soup? What Is The Best Way To Make Mee Suah Soup? Mee Suah, also known as wheat noodle or flour vermicelli noodle, is a thin and long noodle popular in Phuket.

It originated in Fujian, China, and was brought to Phuket 100 years ago by Chinese people.

Today I’d like to provide a hot menu that may be served as a one-dish meal or as a soup (one of the side dishes). It’s Phuket-style Mee Suah soup, or Tueng Mee Suah (Tueng is a Phuket word that means soup).

Mee Suah Noodle is another well-known Phuket local gift that every visitor should get. Mee Suah soup is a popular dish among Phuket residents, most Phuket locals will have Mee Suah in their kitchen.

Mee Suah soup is a traditional Hokkien meal. It’s a Chinese cooking tradition that Chinese immigrants brought to Phuket more than a century ago. Mee Suah is a sort of dry noodle made from rice flour. Breakfast in Phuket includes Kanom-Jeen, boiled rice, desserts, and other specialities. One of the options is Mee Sauh soup. If you visit Phuket and want to have Phuket Mee Suah soup, dim sum restaurants are the place to go. And as for myself, I have a restaurant to recommend; Khaotom Dibuk, a breakfast eatery in Phuket Town.

The smoothness of the noodles and the saltiness of the taste distinguish Phuket Mee Suah noodles. If you’re making Mee Suah soup for yourself, keep in mind that the soup already has a salty flavour due to the noodles. I always get “Swallow Brand” Mee Suah Phuket from its Mae Luan Road shop/factory in Phuket Town. Auntie, the owner, is a pleasant person. Those who find shopping at the brand’s store inconvenient might do it at Phuket Grocery, a local department store. It’s also for sale in a lot of internet shops, as far as I can tell.

Phuket Mee Suah soup is as simple to prepare as quick noodles. You can add anything you need or what you have in the refrigerator; minced pork, poultry, or dried shrimp are all OK. However, shallot and garlic are required for making fried garlic oil in this recipe.

***If you marinate minced pork with a little oyster sauce or add a little onion and garlic before chopping the pork, it will be more wonderful.

Let’s watch a VIDEO clip to see how to make a simple Phuket Mee Suah now that we have the ingredients and have read the directions. Let me repeat, this recipe calls for fried garlic oil, and because the noodles are already salty, the seasoning must be careful not to overcook the saltiness.

Next Post Where to stay – Phuket Marriott Resort and Spa, Nai Yang Beach