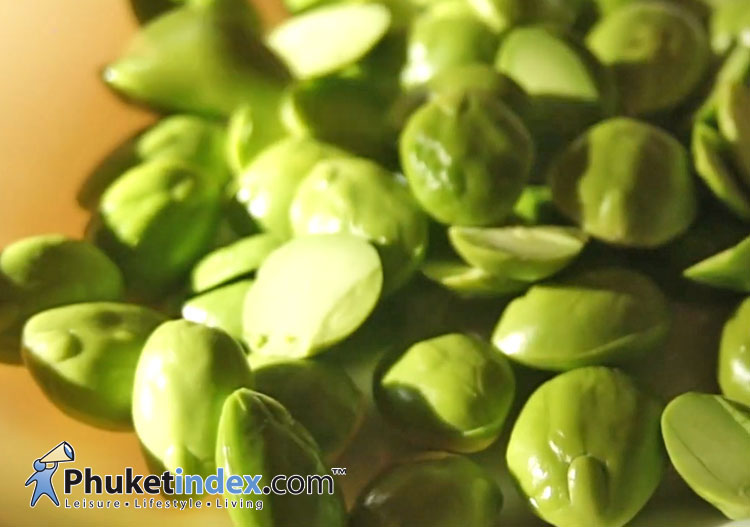 Stink beans, Bitter beans, Petai or Sataw… Sataw or stink bean is known by a variety of names. Sataw (stink bean) is a common dish among Thais in the south. Fresh sataw used to be hard to buy in other parts of Thailand.

However, thanks to advancements in transportation technology, we can now purchase fresh sataw from a local market or order it online via the Shopee or Lazada apps.

The Sataw tree is tall, almost as tall as an electric pole. The tree is between 20 and 30 meters long, with few branches. Sataw leaves are small and resemble tamarind leaves. The flower resembles an upside-down microphone hanging from the branch. It has small sataw’s flowers on its head, which are tiny hairs. Sataw is a perennial plant with the scientific name Parkia speciosa. It belongs to the pea family (Fabaceae) since it produces a pea pod. I’m wondering if Jack the Giant Killer plants this pea tree because it’s very high.

To eat sataw, you must first unwrap it and remove the pea. Sataw is delicious raw or cooked with other ingredients. People scrape the surface of a sataw pea pod and use it as a curry ingredient in some parts of Thailand’s south. When there are a lot of sataw and you can’t eat them all in time, the pod will turn black and be difficult to unwrap. People in the South would boil sataw pods, unwrap the peas, and pickle them in salt water so they can preserve them for a long time. Other famous sataw sections include the young shoots, which are eaten fresh as vegetables with chili paste and are known as “Pak Ket” in Phuket.

Sataw nuts come in a variety of colors and sizes, with some being light green and some dark green. According to the species. For this article, I would like to focus on the two most popular species: “Sataw Dan” and “Sataw Khao.”

Sataw Dan has a long, flat pod with a dark green color and a big, thick pea. There are 10 to 20 peas in each pod, which are firm and pungent. For those who want to grow for their own consumption or for resale Sataw Dan harvesting takes about 6-7 years after planting. Beware, the farm will be damaged by fruit flies. Sataw Dan smells stronger and tastes bitter than Sataw Khao, based on my personal experience. Since Sataw or Stink bean has a bitter flavor, it is also known as a bitter bean.

Sataw Khao’s pods are shorter than Sataw Dan’s. Instead of being smooth and straight like a Sataw Dan, the pod will be bent. Its peas are thin, with 10 to 20 peas in each pod. It’s not too hard and fast to chew, making it ideal for those who have bad teeth. When harvested early, it can become crispy and tasty. The flavor is slightly bitter, with a touch of sweetness. Personally, I believe the flavor is similar to that of the Leucaena grain. If you decide to plant it, keep in mind that it will take 5-6 years to harvest.

When you eat sataw, you may not rest confidently because it has a strong odor that persists even after brushing your teeth many times. So I would like to suggest a solution to the problem of that foul odor. It is to chew 2-3 green round eggplants after eating sataw/stink bean to deodorize. And then clean your teeth before meeting people if you have time. When brushing your teeth, make sure to thoroughly clean your gums, tongue, palate, and anything else in your mouth with the toothpaste.

Sataw has both medicinal and nutritional properties. Sataw is said to have a wide range of nutritional properties, including carbohydrates, protein, calcium, phosphorus, iron, vitamin B1, B2, B3, and C. In terms of medicinal properties, sataw can be carminative and can help with urinary system problems as well as kidney symptoms. However, too much of something is bad, and this is true for sataw as well. Since sataw contains a lot of uric acids, eating too much of it can lead to gallstones and nephritis. Furthermore, people with gout should avoid eating sataw in large amounts because it can lead to recurrent gout.

I have been telling you about sataw for quite some time. Now let’s talk about Phuket cuisine, specifically the sataw-based dish. It is a stir-fried pork belly with sataw. This is a simple cooking dish that anyone can make, and I’ll show you a trick as below.

Chilli can be added to make it more flavorful and more delicious, particularly with the greasiness of the pork belly.
Lime juice helps to cut through the saltiness of the shrimp paste. Switching off the heat before adding the lime juice to avoid the bitterness of the lime.

Next Post Where to stay in Phuket – The Racha Resort