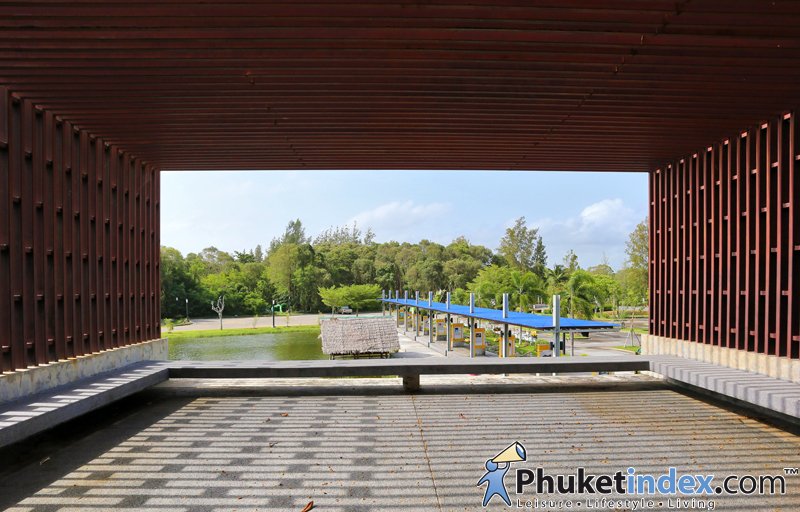 The Gateway was built on 25 rai of government land with its initial budget of 46.7 million baht sourced from tax revenue collected by the Phuket Provincial Administration Organization (PPAO). It was completed and opened in 2007 by then President of PPAO, Anchalee Vanichthepabutr.

It was built to celebrate the 80th birthday of His Majesty King Bhumibol Adulyadej. It is located at Tha Chat Chai, Mai Khao sub-district, near the Thao Thep Kasattri – Thao Si Sunthon Bridge at the intersection entering and leaving Phuket – Phang Nga provinces.

Its main feature is a series of 29 pillars, from which local and international visitors can learn Phuket’s history, arts and culture. For the design, it is designed by Jeravej Hongsakul and Montve Jirawatve “Present the character of vernacular architecture in the south of Thailand through contemporary architecture. The feature of Phuket Gateway is not designed as a normal threshold as usually found in other provinces of Thailand, on the other hand, it is generated as a public space comprising of a contemporary building and landscape. The sculptures include concrete columns line up 100 meters to generate the colonnade like an entrance to the Sino Portuguese building, which has an arcade that connects each building and provides access to every part. The columns lead to a high sculptural column covered with granite, this material represents the origin of tin as the local natural resource that brings out the wealthiness to the community long time ago. Each individual piece of granite refers to various cultures combined into a unique town of Phuket.”

In front of the building, there are also the sculptural works “Home and Life” displaying a sea turtle and several of its gigantic eggs. The sculptural works are Prof. Thana Lauhakaikul’s masterpiece. “Home and Life” is intended to motivate and rise the social awareness in conservation and restoration environment in Andaman Sea to its original condition as a source of aesthetic, life and Phuket cultural. Leatherback turtle “Tao Mafueng” is the famous turtle that often see at Mai Khao beach, Phuket. But the artist created its tortoiseshell in different feature in order to represent all kinds of them.