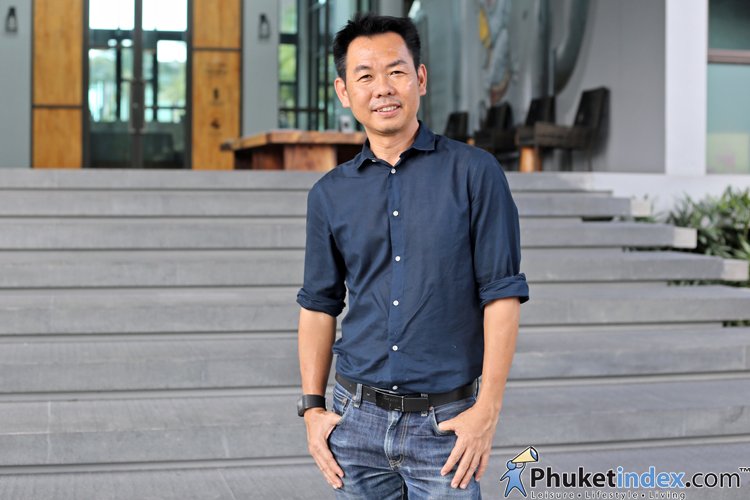 Can you please tell us about Pracharath Rak Samakkee Phuket?
Pracharath Rak Samakkee Phuket is a social enterprise company working as a consultant for local SMEs (small to medium businesses) in Phuket. We aim to help the local community increase its income without taking any profit and our success rate will be evaluated by the increase in value or income of the target group.

What projects are you working on now?
Our main focus is on helping and developing companies in Phuket. Actually each province will establish their own social enterprise companies under the name ‘Pracharath Rak Samakkee.’ The local grassroots economy actually covers all local economic foundations but we picked three groups to work on to begin with which are batik, Phuket lobsters and Phuket pineapples.

Why these three groups?
They’re Phuket’s identity. We looked at what represented our province and Phuket’s pineapples are renowned for a long time, known by many and are the root for many other species grown in Thailand. We found that the three groups were starting to fade in image since nothing has been done to promote them for some time as locals have tended to move away from these occupations. We realize that if we are able to bring them back, it will be a good opportunity to preserve these local jobs and leave them as a legacy for the following generations.

Why Phuket Lobsters? How are they special?
In fact, Phuket lobsters can be found around Southeast Asia, in Vietnam, Myanmar, Indonesia, and Malaysia. ‘Panulirus versicolor’ or ‘painted spiny lobster’ is a species that represents Phuket the most. Its taste is sweet and it has a unique texture.

What have you done?
We looked at the result of research and found that there are about 24 groups of Phuket lobster culturists in Phuket. The challenge is how we can bring back the Phuket lobster trend and increase its demand. We did the field research and realized that demand for Phuket lobsters actually exists but it has its season and the selling and buying is not that direct. The ‘Phuket Lobster Festival’ was launched last year in 2016 and we aim to create a whole new group of lobster consumers and attract other groups of consumers. In the past, there were only a few hotels and beach restaurants that sold Phuket lobsters. But now we ask outlets that have never sold lobsters before to join us in the festival. At the same time, the festival will allow sellers and buyers to meet. Last year, we had 36 restaurants joining us but for 2017 we’re happy to say we have 200 restaurants.

What are your plans for the future of Phuket lobsters?
We learned last year that it’s difficult to bring together 36 restaurants and more than 20 local culturist groups. It’s hard work. In 2017, we have even more. About 200 restaurants are on the list. But we fortunately have DIPA to help with the new platform which is called ‘Smart City’. A new application has just been completed to help ease the ‘matching’ process between sellers and buyers of Phuket lobsters. Restaurants were listed by area and sellers’ profiles were registered and uploaded into the system. Thanks to the DIPA and their support the festival works in a smarter way. We were the first to use it.

If any restaurant would like to join the festival, what can they do?
Anyone interested in joining us just has to let us know by sending a message through our Facebook fanpage (@socialenterprisephuket). Our page admin will contact you for more information. This is the easiest way to do or you may contact the DIPA to create your own profile in the system and then you will automatically appear on the application.

Can we expect a Phuket Lobster Festival every August?
We’ve had quite good feedback after two years. Now the problem is to meet the supply to follow the rising demand. Compared with August last year, entrepreneurs report a 50-100% rise in price. So our work is to increase the lobster supply to respond to consumption for the following years. Recently, in a meeting with the governor, we were asked to make this an annual festival for Phuket. The TAT (Tourist Authority of Thailand) will also give us support to make it happen. For next year, we hope that when we are able to increase the supply, the prices will be back to normal. The Department of Fisheries has been asked to help with the research and to increase efficiency as well.

Recommended Dish: Risotto all’ Astice
This lobster risotto has a light and creamy taste. This dish uses half a Maine lobster cooked in risotto mixed with white wine and ingredients imported from Italy. Some of the meat sticks to the lobster’s shell, so diners will enjoy two different tastes and textures. Add parsley on top for a colourful and tasty relish. (750 THB++ special promotion at La Gritta restaurant in September 2017)

Freshly cooked premium selected Lobsters from the Andaman Sea. Stirred well with salted eggs and enhanced with our chef’s special Thai roasted chili paste. Baan Talay serves quality fresh seafood from the Andaman Sea and you can customize your dishes by selecting the cooking method such as steamed lobster, barbecued lobster or deep-fried lobster. Experience the touch and taste of traditional Thai dishes with fresh lobsters every day at Baan Talay, Thai restaurant at Angsana Laguna Phuket.

Lobsters at the Nai Harn are unparalleled for quality, freshness, and sheer flavour, cooked with selected healthy ingredients and you can enjoy the tropical taste that makes lobster ceviche a perfect appetizer for an al-fresco supper.

We use only the freshest lobster so that when when cook it, it keeps its original flavour. Grilled lobster has a distinct aroma of charcoal smoke and for sure the smell of grilled shrimp will stimulate your appetite. One more specialty of this dish is our seafood dipping sauce, made by blending olive oil with Thai herbs and we’d also like to recommend our famous focaccia bread – its taste is like tom yam (Thai hot and spicy soup). It’s perfect with grilled lobster!

Our Italian-born chef Andrea Rossi uses this homemade recipe he learned from his grandma. He puts all his talent and experience into creating this special lobster dish at La Trattoria. “This sauce and burrata go incredibly well with the freshest lobster meat,” says Chef Andrea. He also enhances the presentation of the dish by serving it with the whole body from head to tail to improve the dining experience.