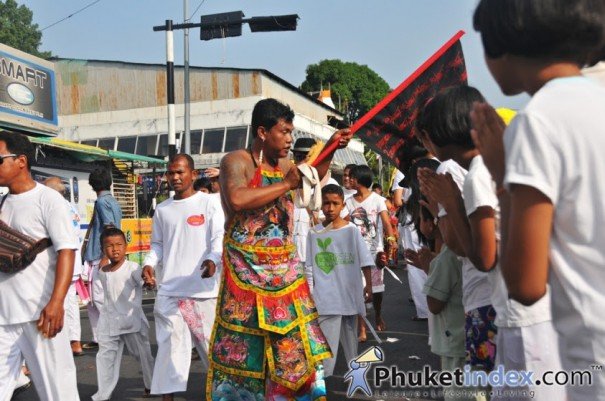 The Phuket Vegetarian Festival is now one of the worlds’ most talked about festivals and can only be described as mind-blowing. This dramatic celebration takes place during the first nine days of the ninth lunar month of the Chinese calendar.

This auspicious event sees the whole island taken over by the white clothed devotees, and for nine days they convert to vegetarians, and follow the traditions of refraining from killing animals for food, drinking alcohol, engaging in sex, quarreling or telling lies, all in order to purify their minds and bodies.

Throughout the festival wafting smoke fills the air and drums are sounded, especially during ceremonies. It’s believed that the louder they are the better, because the noise drives away evil spirits. Some of the highlights of the festival are the ear splitting sound of firecrackers, lion dances and incredible acts of self -mortification such as climbing knife ladders, walking on hot coals, a ritual bridge crossing and street processions through the main roads of Phuket Town in which the mediums, in a state of trance, have their cheeks pierced and bodies spiked with various types of sharp objects like large knives, skewers and other household items without showing any signs of pain. This is definitely not recommended for the faint hearted. 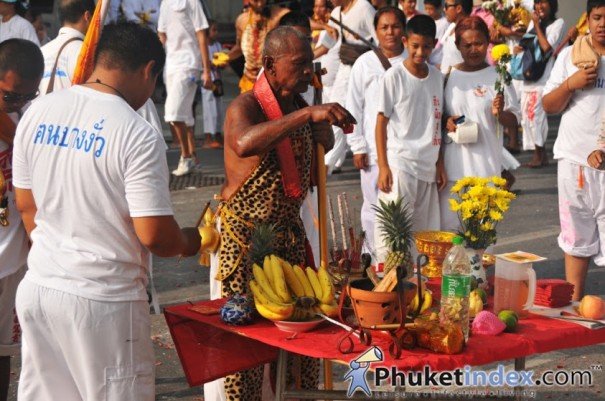 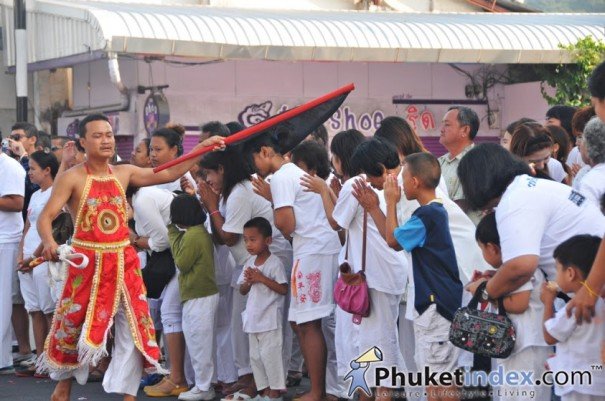 Although the true origins of the festival are unclear it is believed that it originated in the south-eastern part of China near the Fujian Province. It is believed it 0first came to Phuket in 1825 when the island was a trade center between China, India and South East Asia and a large number of Chinese immigrants came to work at the tin mines and rubber plantations. At this time, there was a group of Chinese opera singers who had come to entertain the workers and it was during the Chinese ninth lunar month that Phuket was hit with an epidemic which caused many of the group to become very sick. After some time it was realised that they had forgotten to pay homage to two of the emperor gods, Kiew Ong Tai Teh and Yok Ong Sone Teh. The traveling opera then knew that they would have to observe a strict vegetarian diet.

The traveling opera all recovered from the sickness, and the people of Phuket were so amazed that the vegetarian ritual, and its ceremonies, had resolved the problem they embraced the faith enthusiastically. Thus the festival began on the first evening of the ninth lunar month and continued until the ninth evening and has done ever since.

Today, the belief is that the festival will bring good luck to individuals who partake as well as to their communities.