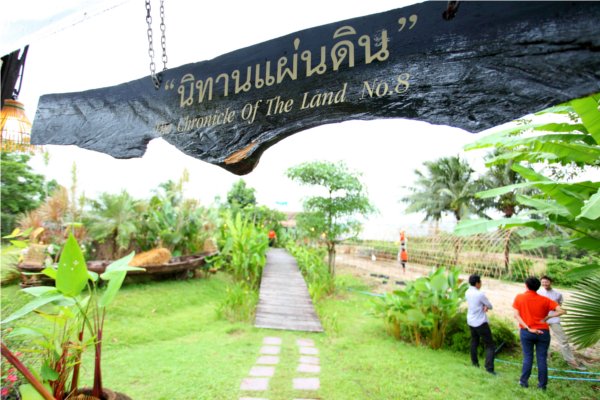 There is a new attraction here in Phuket which, in my opinion, is unfortunately not getting the attention or visitors that it really deserves.

‘The Chronicle of the Land – Land Art No 8’ is installed at the unique and fascinating At Panta Phuket in the Thalang district of the island, and is part of a project initiated by the well known Thai composer, songwriter and arranger Pongprom Snitwong Na Ayuthaya, whom last year decided to extend his birthday greetings to His Majesty the King with a “music and art” project, entitled “Nitarn Pandin” (‘The Chronicle of the Land’).

Pongprom had planned to come out with this work to mark the King’s 84th birthday anniversary in 2011 but due to the severe floods postponed the project.

The project is made up of two parts. The first being  a song entitled “Nitarn Pandin”, which narrates the meaning of “King” or “Raja” in different eras and features lyrics in ancient languages.

The second, entitled “Niwet Silpa” or “Land Art” features the creation of 9 pieces of ‘Land Art’, inspired by 9 different national artists, and erected in 9 provinces around Thailand, the artists & provinces being Tawee Ratchaneekorn here in Phuket, Sakarin Krue-on in Khon Kaen, Nopadon Viroonchatapun in Nakhon Nayok, Amrit Chusuwan in Songkhla, Thongchai Srisukprasert in Chiang Mai, Pairoj Wangbon in Trat, Panya Vijinthanasarn in Sukhothai, Suriya Namwong in Chiang Rai and Kamol Tassananchalee in Bangkok. Each of the created Land Arts represents His Majesty’s talents and projects and range in size from 5 to 20 Rai in area.

“The Chronicle of the Land”, was organised and launched with the assistance of the Thai Rakbankerd Foundation together with CSR Club, Humming House Company and Thai PBS.

The Chronicle of the Land No.8 “ @ At Panta Phuket”

Being a resort that prides itself on being a true Thai cultural retreat, where everything on offer is truly Thai, when one of the selected locations, Ayathuya, had to withdraw their bid for their piece of Land Art, At Panta Phuket and their team could not resist the chance to take part in this once in a lifetime opportunity of creating and exhibiting a piece of The King’s Land Art Project, that would be part of the iconic ‘The Chronicle of the Land’ project, and which would in no any way be of financial benefit to the resort. National artist Tawee Ratchaneekorn was appointed as designer for the piece and was in Phuket to oversee the complete installation process of ‘The Chronicle of the land No 8’.

Tawee’s piece, spread over a 4 rai area of land adjoining the resort, previously a rice paddy field, was inspired by the prestige of His Majesty the King that is spread throughout Thailand.  Thawee created an art piece which is formed in the shape of a compass and consists of Pho leaves, a heart-shaped leaf which represents Dhamma and the virtues of the King, pointing outwards in many directions. The art reflects His Majesty’s royal speech “We shall reign with righteousness for the welfare of the Siamese”.

The management team of At Panta Phuket is very proud of to have been a part of The King’s Land Art Project. It was a once in a lifetime experience that allowed them to do something very special for their King. The team managed to gather a group of around 300 volunteers, made up of resort staff, TV representatives, local teachers and school children, members of rescue foundations, staff from public organization and local business people, all with the same wish to work in harmony and unity together. The group was mainly made up of people from the Thalang area as the goal of the project was to get local people to come & join together in a place where they would feel love and cherish what they had achieved. The 300 pairs of hands worked tirelessly in creating this amazing piece of ‘Land Art’ over the duration of five days. The completed ‘The Chronicle of the Land No 8’ instillation uses a total of over 4000 bricks and 70 sqm of grass.

For more information and photos please visit www.facebook.com/AtPanta or www.nitarnpandin.org

Previous Post Phuket’s Rang Hill – A must place to visit

Next Post Phuket – The ideal base for island hopping