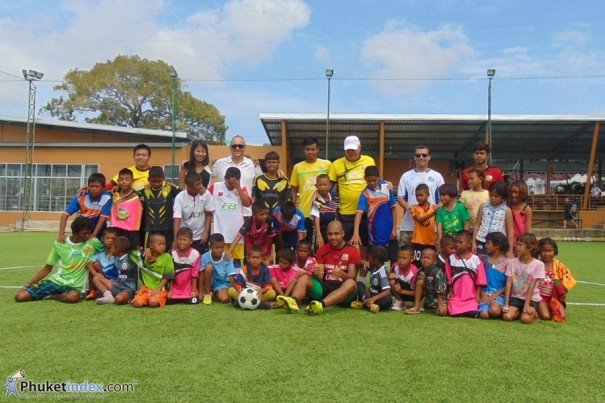 Formed in 2011 by the late James (Shaggy) Lakin and very much alive Richie Dil, the Phuket FC Rawai Supporters Club, also known as The Mushy Peas, is a group of nearly 70 local Thai’s and expats who have followed the Island’s Phuket Football Club since its formation in 2010, they have a following of over 600 fans on their Facebook page, a number which grows match by match, and even featured in a special report by Fox News Asia at the start of the 2014 season.

Now football fans and charity are not words that you would usually associate with each other, but with the Phuket FC Rawai Supporters Club it’s a very different story as they recently kicked off their own Mushy Pea’s in the Community charity programme where certain members of the group are donating 1000 THB every month for a year, which is donated to worthy causes and projects in the local community. 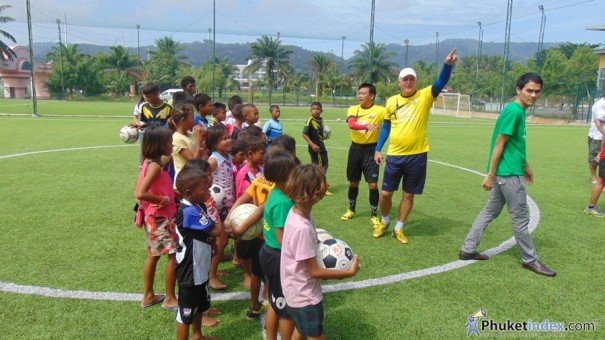 As part of October 2014s Mushy Pea’s in the Community programme, the group arranged for over 30 Rawai based Moken sea gypsy village kids to train and be coached by players and coaching staff of Phuket FC, including Brazilian head coach Reuther Moreira, at the club’s Republica training ground. Transport to and from the footy clinic and lunch and refreshments after the training was also paid for by Mushy Pea’s in the Community fund.

Phuketindex.com went along to the football clinic to volunteer some time, and also to speak to Richie about the Mushy Pea’s in the Community programme. 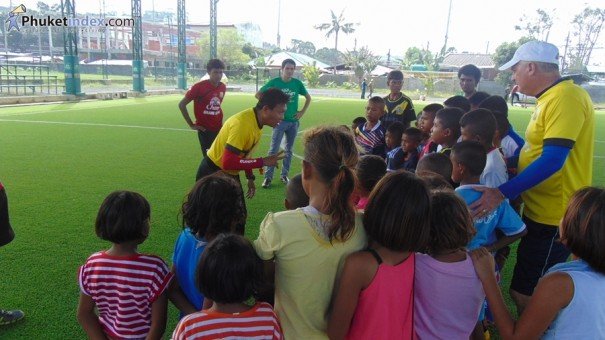 What inspired you the get the club involved with charity work and what kind of reaction did you receive?
A lot of the members of the Phuket FC Rawai Supporters Club either lives in Rawai or work abroad and are based in Rawai when they come back to the island, and we all feel as if this area is our home. We could see that there were lots of needy causes and people around and we just wanted to show that we cared for our community, and for the people who lived in the community. We wanted to help, or at least try to make a difference to some very sorry situations.

Have you previously been involved in any charity work?
This is a new venture for the Phuket FC Rawai Supporters Club as a group, but there are many members who have helped out with charities before in various countries in their own different way. 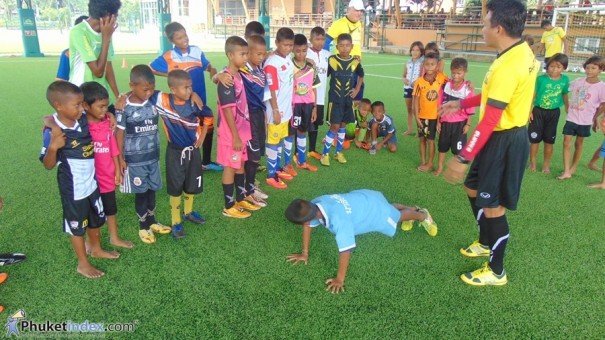 How do you raise the funds for the charity activities?
At present, all donations to our fund are made from a group of people who have committed to donating 1000 baht per month for 12 months to begin with, hopefully this will continue again and again.

How much work goes into organising an activity like todays?
Not that much time is needed to organise something like this if everybody is eager to help and this also makes collecting the money quite easy. The only part of the organising that is tough is deciding which needy cause or group of people should be donated to each month. It’s sad and unfortunate for me to say that there are some many causes that need our help! 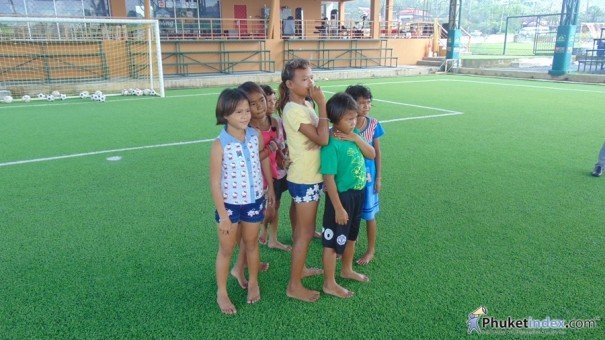 How easy is it to get the likes of Phuket FC involved in your activities?
Phuket FC was very easy to get on board and they also wanted to show how they cared for the community, they wanted to try and help in any way that they could. Benz has been a great help and he is always eager to help us with whatever suggestion we may have and is always prepared to offer the training ground or members of the clubs staff to assist us.

What group benefits most from the charity work you do?
At the moment we are showing a lot of attention to the Moken sea gypsy village in Rawai as they’re some of the poorest people on the island. There are over 200 children there who sometimes just need a good day out or on another occasion may need some new school uniforms, we are prepared to assist any group at all but we just find that this group is the neediest at this moment in time. 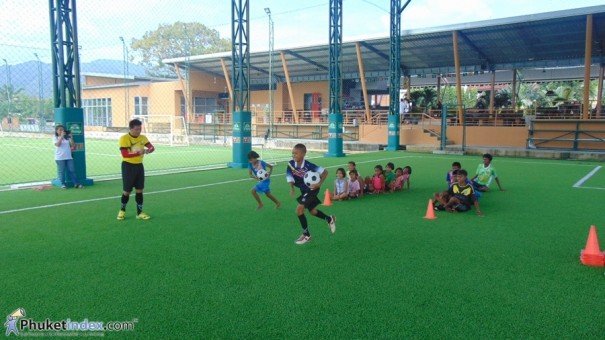 How rewarding is the work that you do?
These kinds of activities are so rewarding, to see how happy the kids have been with some of our days out or donations just make any effort all worthwhile.

Do you have a most memorable moment so far?
Every moment that the kids are running around and smiling and laughing and enjoying themselves are all equally memorable. 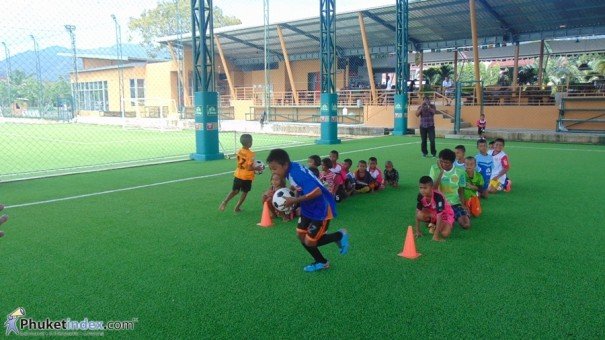 How do you see the charity growing in the future?
Our charity is growing monthly and I can see it going from strength to strength with people joining all the time, and with the media coverage we are now getting the word is spreading, we could have a seriously large group donating each month on our hands in a few months’ time and that is when we will be able to make a real difference to hopefully more than 1 group at a time. 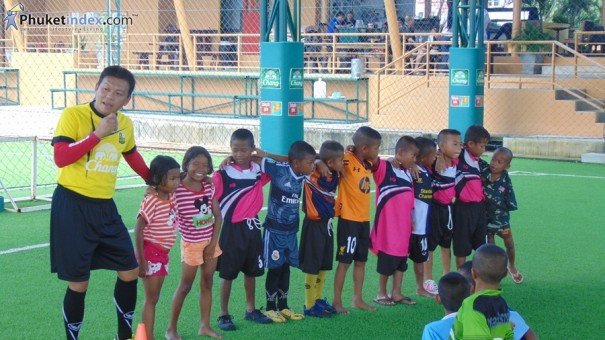 How can people get involved with what you do?
Our football supporters group is on Facebook and the page is FC Phuket Rawai Supporters Club and we can be contacted via this page.

Alternatively, people can go into the Islander Bar and Restaurant in Rawai and ask for the Phuket FC Rawai Supporters Club or Will and Mark. Rawai is a small area and if you speak to anybody and ask about the Phuket FC Rawai Supporters Club you will be sent in the right direction. All long term commitments or one off donation are all gratefully received. Please look on our webpage to see what is happening each week or month and to see where everybody’s kind donations are going.

The Islander Bar will also gladly receive any donation of goods including clothes new or old or toys etc to distribute to the less fortunate kids and old folks at the Rawai Sea Gypsy Village and Rawai Temple. 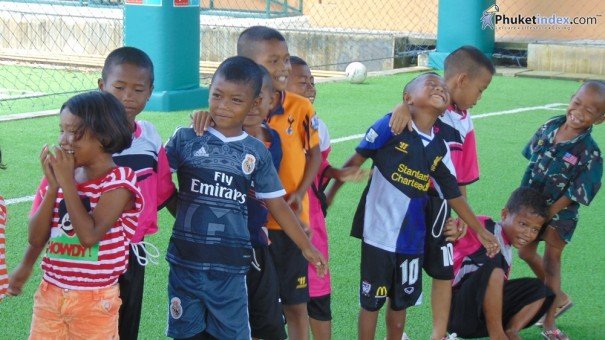 Since conducting this interview, Richie has also informed us that September’s donations were saved and was joined with October’s donations to buy needy kids school uniforms to start the new school term. Unfortunately, as their parents could not afford to buy the uniforms they had to drop out of going to school and drop their education.