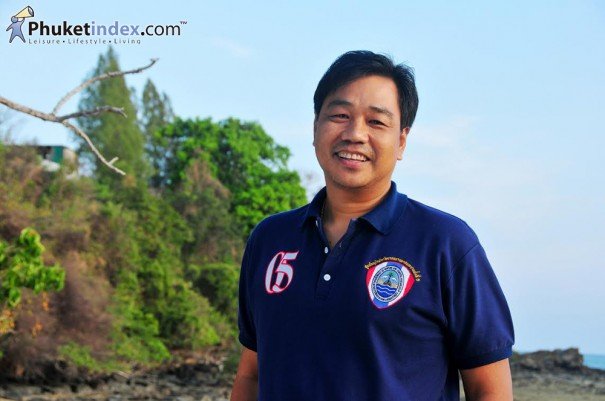 In this interview, you will get to know Marine and Coastal Resources Conservation Center 5 Director and the Centers Operations directly from the Director himself. Khun Tanet Munnoy kindly agreed for our team to meet with him at his office at the stunning Cape Panwa area of the island. The reason why we wanted to discuss the center with Khun Tanet was to provide you with the true views and facts of the agency and individuals who dedicate their lives to care for the resources both along the coast of and in the Andaman Sea. We believe that the general perception of Phuket Island is it is considered to be region abundant with natural beauty, and also a treasure trove of money and income for its people. However, if you look at Phuket’s conservational programs, unfortunately there are very few, and they are certainly not a priority. Indeed, the nature of Phuket, which at present is very fragile because of the growing use of resources, needs to be assessed to know its exact current situation so that measures can be taken to ensure the island’s nature, especially within the sea, remain intact. 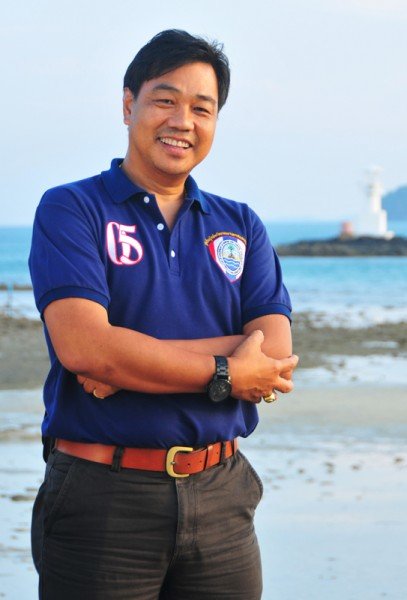 The Mission of Marine and Coastal Resources Conservation Center 5

Khun Tanet says “Our center is part of the Government of Thailand coming under the jurisdiction of the Ministry of Natural Resources and Environment’s Department of Marine and Coastal Resources. We work as “Defenders” whose role it is to consistently monitor and oversee the area’s coastline. The Center, which is responsible for the Andaman Sea, an area with an approximately 585 km long coast, covering 3 of the 6 Andaman provinces; Phuket, Phang Nga and Ranong. Our 3 primary missions are:

The protection of natural resources, that is conservation, although the Department itself does not have its own legislation. But we do get mandates from other relevant laws that need to be enforced fairly and seriously. The problem of resources, especially in the sea, is caused by mainly human waste. Many arrests are made for large commercial fishing boats found operating within the 3,000 metres nearshore zone, etc, devastating local marine resources, and drastically reducing fish populations which should still be in abundance.

Conservation and restoration of areas with seagrass or coral. These areas can be exploited by tourism, but must be controlled by avoiding excessive harmful human activities and monitoring destruction caused by natural factors too. However, restoration missions can be a remedy in areas which are vulnerable to loss of resources, such as the collection of marine debris, which is a problem that will continue to destroy seagrass and corals. Currently, this is a problem that’s an international issue. Seagrass areas can also be restored by planting new seagrass. This includes coral transplantation to replace those that have been destroyed by things such as anchoring of boats and destructive fishing.

Promote the conservation of marine and coastal resources, each year we organize workshops and activities for the public, network members, students and entrepreneurs such as training camps to instill a love for the sea, or enhancing programs to educate tour guides and operators to provide them with accurate information on the use of natural resources. We also co-organize annual events with groups of diving operators and relevant government agencies gathered under the name “Go-Eco Phuket” to collect marine debris, so far these have been a huge success and achieved so much.

Why did the Andaman change?

The center only has 30 staff to cover the entire area and this is difficult. But we have a network of public people to help care and provide information to us. The current ecological conditions along the coast and in the sea is worrisome, and most of this has been caused by human activities, for example waste in the sea, fishing with nets and diving irresponsibly thus destroying coral reefs in the tropical zone along the sea coast, and these kinds of problems are severe. And we know that dolphins and dugongs are coming ashore because they have swallowed plastic bags. Yes we understand that underwater artificial reef placements will at some point become beautiful, but this takes more than 10 years, but destruction takes just a few minutes. How do we find a solution, there is only the local people, because it is only the people in the area that understands the situation. We often say that Phuket Island is an invaluable treasure of everyone. Therefore, everyone involved should help maintain this treasure, because what we use every day, but never care for, may someday be degraded until a remedy is too difficult to find. 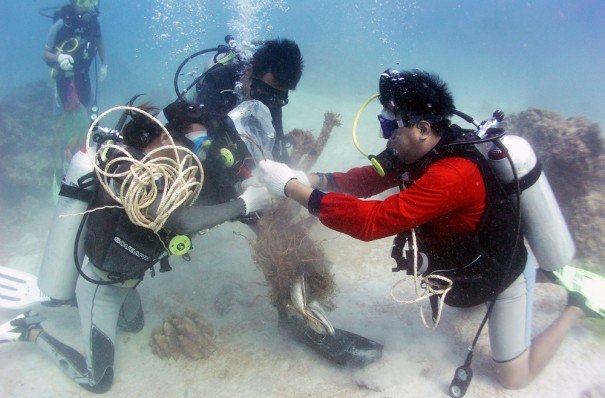 Ecotourism to solve the situation

The center understands that tourism is important for Phuket and the economy, however, we will not be responsible for the promotion of tourism directly, but we will always support it. A survey of the natural areas of Phuket shows that although they are popular with tourism, they are beginning to decline somewhat. But there are also other island areas with a wealth of beauty and integrity. The Center also plans future events that will get support from the local government in promoting new tourist destinations, which focus on ecotourism, island and reef diving visits. We will focus on tourism in order to learn and understand real nature. We expect to promote qualitative travelers as a sustainable success, because they will forward the attitudes and values in the use of natural resources of the sea onto the next generations.

A story of conservation

Conservational activities for coastal resources in Phuket have been held by both the public and private sectors. This is very good, however in my opinion, long term solutions should be added into the story. For example, sea turtle release participants are interested in a specific event day and to release the turtles, but they will soon forget. But if we add a sea turtle nursery that allows people who are interested in helping out with administrative expenses and being adoptive parents of a turtle this would be much better. We will save all the turtles information on a microchip, and in the future this will allow us to check where the turtle is living. We believe that these stories are valuable and more cherished, and that these concepts can apply to other aspects of conservation projects such as mangrove planting or artificial reef placement.

Note to residents and visitors

I was and never will be a Phuketian but I took on my duty about 2 years ago, and when I came and took on this survey I was amazed at the magic and the integrity of the area’s natural resources. I have a motto for the work of our organization “Save the Andaman Sea and our Dreams”, and I want to keep on focusing on our mission to keep Phuket the way it should be. Phuket’s sea is the dream of everyone who visits, both in memory and reality and we want those visitors to keep coming back. And I invoke upon all who are involved in business and tourism here to please be more responsible for our island, more nature friendly, for the island’s long life value and for it to be sustainable.

Next Post “The Upside Down House” – Where childhood dreams become reality