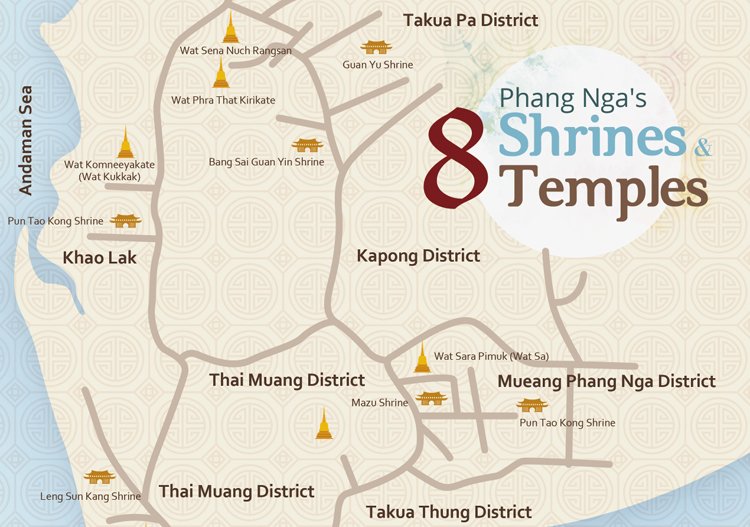 This September Phuketindex.com went on a two-day trip organised by the TAT (Tourist Authority of Thailand) to visit neighbouring Phang Nga Province with its fascinating shrines and temples. It was a great trip with many pleasant memories that we’d like to share with you. Here are short descriptions of the temples and shrines we visited.

History: Formerly known as Wat Kok Kloy and built in 1745 during the Ayutthaya period, in 1937 it was renamed Wat Trimark Sathit.

History: Founded in 1909 as Kukkak Temple, the name was changed to Komneeyakate Temple in 1939.

Highlights: The former abbot of this temple Whang Ar-pa-ka-ro was a Phang Nga native. People in Phang Nga and Phuket revere him. Although he died over 40 years ago his body remains intact.

History: This Temple was built by Thao Thep Sunthorn in the early Rattanakosin period. This place hosted the consecrated water ceremony from the reign of King Rama V to King Rama VII of the Chakri Dynasty. The Fine Arts Department registered it as a historic site in 1999.

Highlights:  The temple has an ancient square-based stupa with 12 indented corners. This place also has five Bodhisattva statues which people come to pay respect to.

History: The temple was built and named as the Temple of Dharma in 2010.

Highlight: The temple is located near Tha Sai Beach and has very beautiful views. There is a magnificent teakwood chapel housing a white jade Buddha image.

History: Built in 1893, the villagers call this temple Wat Lum. This temple was registered as an archaeological site in 1999. There was reputably a Buddha footprint on a hill near the temple.

Highlights: This temple has Buddhist relics in a Chedi built in 2011.

History: This wat was created by Phraya Senanuchit (Nuch Na Nakorn) Governor of Takuapa Province in 1847. The temple was built according to the royal style of King Rama III and King Rama V visited it in 1890. This place used to be a location to perform the consecrated water ceremony and The Fine Arts Department registered the place as an archaeological site in 1996.

Highlights: A museum at the temple displays many antiques such as a wooden Buddhist pulpit with the monogram ‘Jor Por Ror’ of King Rama V.

History: Built in 1762 during the Ayutthaya period and formerly known as Wat Kong Ka. The Fine Arts Department registered the temple as archaeological site in 1996.

Highlights: Inside the temple there is an ancient Buddha statue, the villagers call Pho Than Chaofa. A new golden pagoda is also one of highlights of the temple.

History: The temple is part of a mountain that has many small caves. Inside one cave is a 15-metre long reclining Buddha image. The Fine Arts Department registered this place as a historic site in 2002.

Highlights: There are many monograms of the kings and the royal family of the Chakri dynasty.

History: The Mar Jor Poe or Mazu Shrine is more than 100 years old. Built in 1913, the walls of the shrine feature black ink murals depicting the ‘Hong Sin’ story written during the Ming Dynasty and on the right-hand side is the story of the ‘Three Kingdoms.’

Highlights: This shrine is presided over by the Chinese goddess of the sea, Mazu (AKA Mastu). She is worshipped throughout China’s coastal regions and overseas Chinese communities throughout Southeast Asia and is said to grant protection for fishermen and smooth traveling with successful business.

History: This shrine has more than 100 years of history. Originally located in the northern market of Takuapa. Later, the new (second) shrine was built at Bang Sai and completed in 1988. This shrine is dedicated to Guan Yin and Tian Hu Nguyen Soy (god of performing Chinese opera).

Highlights: This place is popular with worshippers praying for a child from Guan Yin. It’s also popular with actors seeking success.

History: The sign above the door of the shrine states that the shrine was built in 1872. This shrine is dedicated to Qingshui Zushi and his image (Kim Sin) is 100 years old.

Highlights: People often ask for blessings to have a happy life and pray for their agricultural produce to flourish.

History: Boon Sung, a Takuapa villager built this shrine. A sign above the entrance door states that the shrine was created in 1945. This shrine is presided over by Guan Yu, respected as the epitome of loyalty and righteousness.

Highlights: Business owners pray here for honesty and to eliminate corruption in their business while students pray for their success in education.

History: Chinese from Hainan built this shrine in 1872. The shrine is dedicated to the god of land (Pun Tao Kong) and the god of water.

Highlights: This place is popular with property agents and property developers who pray for success and wealth. It’s also popular with fishermen, sailors, traders, especially those who travel or do business to do with water.

History: This shrine was built in 1930 and is dedicated to Qingshui Zushi. The shrine was renovated in 2000.

Highlights: People pray here for a happy life and for the wellbeing of their agricultural produce.

Highlight: People pray here for longevity and to live peacefully.

History: There’s an old story about this shrine: there was a once a Chinese merchant who came from China in his big boat but when it was in Phang Nga Canal (near this location) his boat became stuck, so he ask god for help, and prayed that if his boat could get out he would build a shrine – which he did. His Royal Highness Prince Chitcharoen, Prince Narisara Nuvativongse visited the shrine in 1902.

Highlights: This place is popular with property agents and property developers who pray for success and wealth in their business. Locals also believe that if sprinkle yourself with water from the cave it will bring you good fortune.