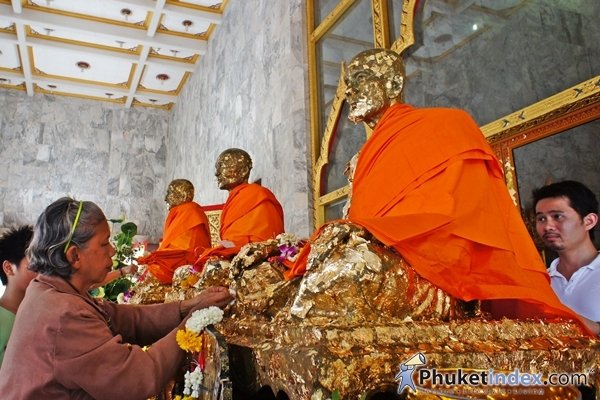 Therevada Buddhism is practised by around 95% of the Thai population. Buddhism is very much a tolerant religion, and therefore most Thai people are open and happy to discuss their beliefs. Religion is a fundamental part of daily life in Thailand, with the local temple being at the centre of many on goings and especially Buddhist holidays.

Buddhist holidays, most of which mark important events in the life of the Buddha, are determined by a lunar calendar. Buddhist holidays are joyous events in the life of a Buddhist and the celebrations typically start with a visit to the local temple.  This is when food offerings are made are given to the monks.  Then, followers will often listen and engage in a series of teachings, truths or religious conversation. Afternoon celebrations include a variety of actions, such as giving food to the poor.  This is done in hope of earning merit during this time of respect and observance.  Followers will then walk around the temple three times, which is significant in honoring the Three Jewels. The Three Jewels are the Buddha, who symbolizes attainable goals, the Dharma, which are the teachings that lead followers closer to their goals, and the Sangha, which represents the monks and nuns.

On Buddhist holidays, government offices, banks, small shops, offices and schools close. Some restaurants and bars will also close as sales of all kinds of alcoholic drinks are banned from all retail outlets. It is also seen as offensive to consume alcohol on these days and violators are liable to be subject to quite hefty fines.

So what are the Thai Buddhist holidays and what do they represent?

Magha Puja is a public holiday when Buddhists tend to go to the temple to perform merit-making activities.

Magha Puja day marks the four auspicious occasions, which happened nine months after the Enlightenment of the Lord Buddha at Veluvana Bamboo Grove, near Rajagaha in Northern India. On that occasion, four miraculous events coincided;
•    1,250 enlightened disciples of the Buddha spontaneously gathered
•    Every one of those enlightened disciples had been given monastic ordination personally by the Lord Buddha
•    Those disciples knew to meet together without any previous appointment
•    It was the Full Moon day

The Buddha gave an important teaching to the assembled monks on that day about 2,600 years ago called the ‘Ovadapatimokkha’ which laid down the principles by which the monks should spread the Buddhist teachings. In Thailand, this teaching has been dubbed the ‘Heart of Buddhism’.

Buddhist New Year or Songkran
Songkran Day (Thai New Year) originated in Sanskrit as movement or change. This meaning has an astrological definition of the Sun moving from one zodiac sign to another. The Songkran period is generally on the 13th, 14th, and 15th of April each year.

Songkran is also known as the “Water Festival” as people believe that water will wash away bad luck. Traditionally, Songkran is recognized as a valuable custom for the Thai community, its society and religion. It originally provided families with an opportunity to gather in order to express their respects to the elders by pouring scented water onto the hands of their parents and grandparents and presenting them with gifts including making merits so that the result can be dedicated to their ancestors. The elders in return bless the youngsters with good luck and prosperity.

However, nowadays Songkran has become public water fights which are enjoyed throughout the country. People are encouraged to throw water on each other, and it often becomes a nationwide free-for-all!

Visakha Bucha Day
Visakha Bucha Day or Visakha Puja Day is one of the holiest days in the Buddhist calendar because of three important incidents in the life of Lord Buddha, i.e. his birth, his enlightenment and his passing away, all fall on the same month and date – the full moon day of the sixth lunar month. It’s informally called Buddha’s birthday.
In the morning, devout Buddhists will visit their local temple bringing food, flowers and offerings for the monks. In the evenings there is often candlelit processions and the Buddhists will walk around the main shrine of a temple three times to celebrate the three jewels of Buddhism – Buddha, his teachings and the monkhood.

Asanha Bucha Day
Asanha Bucha Day or Asanha Puja Day is celebrated on the full moon of the eighth lunar month; Asanha Bucha Day marks the first public sermon given by Buddha, which took place at Deer Park in Benares, India. In this sermon, known as ‘Setting the Wheel of Dhamma in Motion’, Buddha presented the Four Noble Truths to five ascetics. While the ascetics believed in self-mortification, he taught that the cessation of desire was the key to enlightenment. Upon hearing this message, the five men reached enlightenment and became the first Buddhist priests or Sangha.

The entire day is revered and certain precepts are adhered to by the more devout Buddhist or by those who have the inclination and opportunity to do so. The Wientian ritual ceremony is performed in the evening as many go to nearby temples bringing candles, flowers and joss sticks completing three trips walking around the Temple’s sacred grounds.

The day also marks the beginning of Vassa, the Buddhist lent period also known as the Rains Retreat.