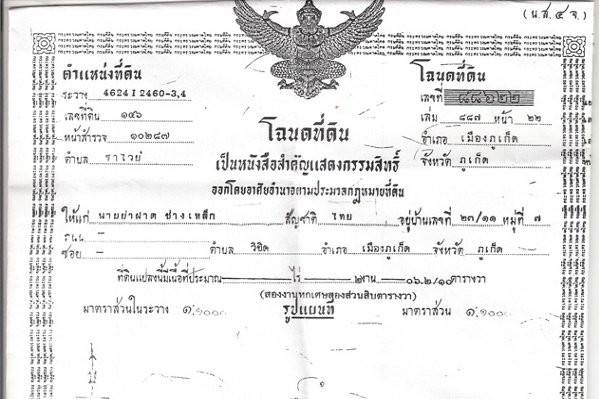 A large number of visitors to Thailand often become interested in investing in land or some kind of property. However, those foreign investors need to take care when it comes to Land Title Deeds, the most important part of any real estate, as they are not as simple or the same as those in the country from which they come. Before making any commitment foreign investors should always seek advice and assistance from a legal representative who can make sure that all is in order when it comes to their dream purchase.

It is also important to remember that Thai law generally prohibits foreigners from owning freehold land in Thailand. However, they can be registered as the holder of certain rights like lease, habitation, mortgage, usufruct or superficies, etc.

According to its basic definition in Law, a land title deed is a deed or document proving a person’s legal right or title to a property, particularly real property. It is a legal document signed and sealed and furthermore delivered to execute a transfer of property.

Title deeds are issued by the land department and other government departments of Thailand. There are six main title documents which are issued by the Land Department office for the use of individuals which relate to temporary occupation, use and occupation, confirmed right of possession or notification of possession of land and below are brief descriptions of land title documents officially issued in Thailand.

Chanote (Nor Sor Si (4) Jor)
The Chanote is the most secure land certificate, issued by the local land office. The land held under a Chanote has been truthfully surveyed and GPS plotted in relation to a national survey grid and marked by unique numbered markers positioned in the ground. The Chanote is what you should first look for if you are looking for land in Thailand. If the land has a Chanote then it can be bought and sold hassle free. Moreover, there are no general restrictions on the use of the land and it can also be sub-divided should the owner so wish.

Nor Sor Saam (3) Gor
This is the second strongest type of title; it signifies the land owner’s right to possess the land, without conferring actual possession. As with Nor Sor Si (4), this type of land has been truthfully surveyed, GPS plotted and is marked by unique numbered markers positioned in the ground.  Assuming that no planning or environmental rules are contravened, this type of land may be used for any purpose. The land may also be sold or leased. It is also possible to split this type of land into smaller plots, to sell or lease separately.  It is possible to file a request with the Land Department to change this type of land to a Chanote title, usually without any problem.

Nor Sor Saam (3) Khor
The Nor Sor Saam (3) Khor on the other hand, is similar to the N.S.3 Gor; however, it has not been surveyed and has been issued for an area which has no markers set by using an aerial survey. This document is issued by a land officer. Moreover, there are no restrictions for the use of the land and there is no need to publicise any legal acts, and it is possible to subdivide the land into smaller plots.

Sor Kor Nung (1)
The Sor Kor Nung (1) land document is only a notification of land possession and to continued existing rights. Long-term dwellers may have the right to apply to the government for a higher form of title deed, they are essentially squatter’s rights registered at the district office for a small fee. Unlike the Chanote and the Nor Sor Sam Kor, they cannot legally be sold, nor can you build on the land if you are stupid enough to buy it. Foreigners should ignore the Sor Kor Nung at all costs.

Nor Sor Song (2)
The Nor Sor Song 2 is an approval memo issued by the land department office to the possessor. This document gives the holder the right to occupy and use the land for a temporary period of time. The possessor has to initiate occupation of the land within six months and has to complete the utilization of the land with three years from the receipt of the document. This land may only be sold or transferred by inheritance.

Nor Sor Saam (3)
The Nor Sor Saam (3) is a title deed which demonstrates someone’s right to acquire a definite plot of land. However, this land title has not been accurately surveyed and there are no unique numbered markers positioned in the ground to mark the boundaries of the land, therefore, the area must be confirmed with neighboring land. The name shown on the title is the person who has the right to the land and has the legal right to possess the land and use the benefit of the land as an owner (it is not actual full ownership). Land with this title cannot be transferred immediately; a 30 day public notice must be posted before any sale can occur.