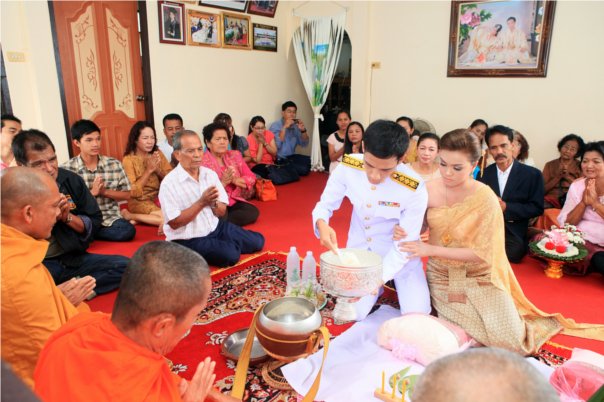 Buddhism is a large part of Thai people’s everyday life, and Buddhism is full of ceremonies which mark momentous occasions of their lives. Of all the Buddhist ceremonies, the Thai Buddhist wedding is perhaps one of the most spiritual and beautiful of them all.

Traditional Thai Buddhist weddings are known to be one of the most romantic wedding ceremonies in the world, and these weddings are not only a true traditional wedding but also a social gathering.

Often in traditional Thai marriages, a close friend of the groom will request the bride’s hand to her father. Then talks will begin about the dowry (Sin‐sod), which will include how much money and what gifts will be given to the bride’s family.
Once the dowry has been agreed, it is then an important factor for the bride and groom to find the most auspicious date for them to wed, thus ensuring they have a happy and prosperous marriage.

Unlike western weddings, Thai weddings start early in the morning. This is the spiritual part of the wedding, which sees 3, 5, 7 or 9 monks arrive to visit the marrying couple. As they chant and pray, a lit candle is placed in a bowl of water, the water will later be used later to bless the couple. A bowl of white paste will also be blessed and later smeared on the foreheads of the couple.

The couple and relatives will then offer food to the monks who, after their meal, will chant again whilst the most senior monk will go around blessing the couple and gathering with holy water before returning to the temple.

In western culture it’s usual for an engagement to take place prior to the wedding. However, in Thai culture most couples hold their engagement ceremony on the morning of the wedding. This will see the groom and his family offers the dowry to the bride and her family, this is referred to as the khan maak procession. The groom, his family and a procession of guests will take the dowry (khan maak man) on special trays to the family of the bride. They will be accompanied by musicians playing traditional long drums as the procession dances its way to the bride’s house.

The main part of the wedding, usually conducted by a senior elder, either a member of the bride’s family or respected member of the community, will see the couple wear traditional Thai clothes and kneel in front of the senior elder. The couple ‘wai’ as a holy string is draped from one persons head to the other, forming a circle and connecting the couple (Sai Mongkol). It is symbolic that the thread forms two circles which whilst linked, also remain independent. This indicates that the couple’s destinies are linked, but individual identity is retained. The senior elder and guests will then pour holy water over the couple’s hands for good luck in the ‘rod nam sang’ ceremony.

The well organized wedding party will see a large number of guests, made up of family, friends and locals, come to enjoy a good meal. Many will leave immediately after eating, as more than often they have travelled for several hours to attend and have to return home the same day.

The party will then have plenty of drinking and dancing and will continue well into the early hours of the morning.
A Buddhist wedding ceremony is as serene and evocative an occasion as one could wish for, and provides the feeling that one’s union is welcomed, and entirely in place, in this exotic land.