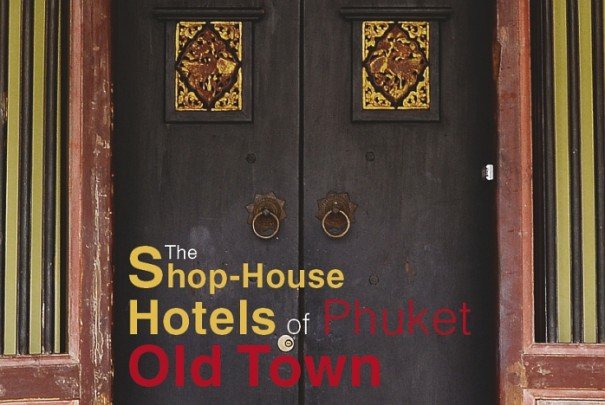 “Sino-Portuguese” style architecture was first introduced to Phuket in the early 20th century. It was tin magnate and first Hokkien Governor of Phuket Kor Sim Bee Na Ranong, later given the royal title of Phraya Rasada Nupradit, who was instrumental in not only introducing this style of architecture to the island but also in bringing about the development of Phuket town, adding new roads and even enticing the Chartered Bank to open in Phuket.

At the time many Chinese migrants came to Phuket seeking to make their fortunes from Phuket’s lucrative tin mining industry and with them came their Hokkien culture and language.

Many of these migrants gained mine concessions and made fortunes from the industry. Some built huge mansions, whilst others set up shops-houses along in Thalang Road, what was at the time Old Phuket’s main commercial centre, and adjoining streets such as Soi Romanee. It was these buildings that were built using Sino Portuguese style architecture. 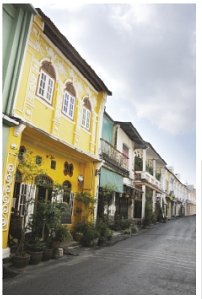 Shop-houses are usually found built in rows, giving rise to the Hokkien Chinese term tiam choo, meaning a row of shop-houses. The shop-houses were originally used as a place for a family to both live and do business, using the front of the building for trading and the remainder, including the upper floor, as a private home.

Because street side space was at a premium, the shophouses in all the rows were always very thin being only 5 meters wide, however, what they lacked in width they certainly made up for in depth with most being as long as 50 meters. Across the front of each of the shop-houses are covered arcades or arched colonnades, known as five-foot walkways or noh kaa kee in Hokkien dialect, these arcades which join the shops together provide shade from the sun and shelter from the rain to the public.

All the shop-houses are roofed with clay brick tiles called Indian Profile. The door and window frames are decorated with Chinese fretwork designs. Two or three large and high window panes are normally built on the upper floor with distinctive designs mostly influenced by classical European architectures from the classic Era (400 BC) to Art Dacor Era (1920-1939), Chinese and Indian arts together with Thai traditional art patterns. It is this perfect blend of different architectural styles and decoration patterns that gives stunning views to visitors.

As mentioned earlier, Thalang Road was at one time Phuket’s main commercial centre and it is therefore seen as an important road in Phuket’s history.

It is along both sides of Thalang Road that you can still find some of the finest examples of “Sino-Portuguese” architecture. Many of the shop-houses and arcades are just as they were in the past and the Chinese fretwork designs still feature on the front doors. 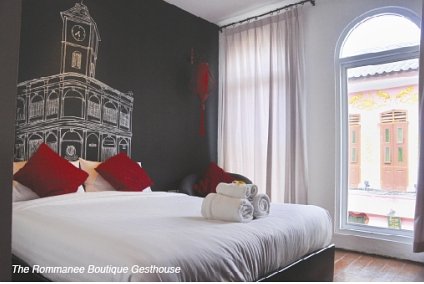 In the past year, in an to attempt to neaten up the roads of Phuket Old Town such as Thalang Road and make them more slightly, all the cables which could previously not be missed have now been put underground and the rows of shop-houses are now free from the unsightly wire clutter and have really neatened the locations up. The districts municipality office also campaigns for owners of the more unkempt shop-houses in the area to make an attempt to restore the beautiful buildings back to how they were in the past and to help make the whole length of Thalang Road a charming pedestrian street as it once was.

As with Thalang Road, Soi Romanee is also the site of a number of old “Sino Portuguese” shop-houses and the name “Soi Romanee” conveyed great pleasure to those here during the booming mining era; its shop-houses were the nightclubs and bars for the miners. A number of the shop-houses have been restored back to their original glory but are now home to coffee shops or gift shops, whilst some are still used as purely for living. It is very clear that although the lifestyles of the people who live in these shop-houses may have changed dramatically since they were built; it has certainly not affect the architecture of Soi Romanee.

The lively new colours used on the exteriors of the shop-houses of Soi Romanee really give them an amazingly pleasant look, and this is why to many Soi Romanee is regarded as the most beautiful and romantic road in Phuket town.

When the tin industry began to decline, a descendent of Sim Bee Na Ranong decided to expand Phuket’s opportunities and branched out into tourism opening the Pearl Hotel in Phuket Town in 1976. The Phuket Tourism Association was also formed to press the government and the Tourism Authority of Thailand to promote the island as a new travel destination.

By the 1980s, Phuket was promoted internationally and the government expanded the airport, improved road infrastructure, established international communication links, and made the island resort much easier to get to.
Once Phuket’s tourism boom was well underway a small number of the owners of the Sino Portuguese shop houses gave their crumbling buildings a new lease of life turning them into guesthouses which boast all the necessary modern amenities. 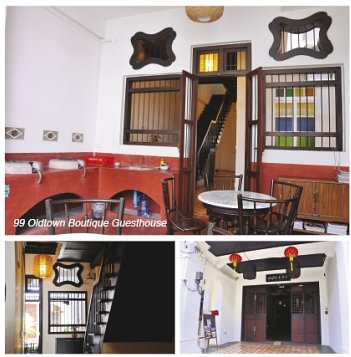 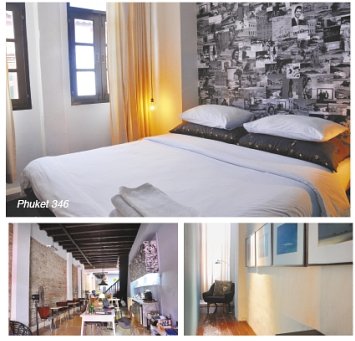 This once crumbling Sino Portuguese shop-house has been given a new lease of life, but still showcases original features such as the water well. The feel is residential, youthful yet cultured, and decidedly non-mainstream.

Phuket 346 offers only 4 non-smoking, simply furnished yet stylish rooms. Every room has high ceilings with wall art decoration. They are equipped with air conditioning, a cable TV and an en suite bathroom.

The guesthouse offers the convenience of a tour desk and free Wi-Fi, which is available throughout the guest house.

The usage of the ground floor space as a bar, café and contemporary art gallery can also be seen as a nod to acknowledge the bohemian origins of Soi Romanee.