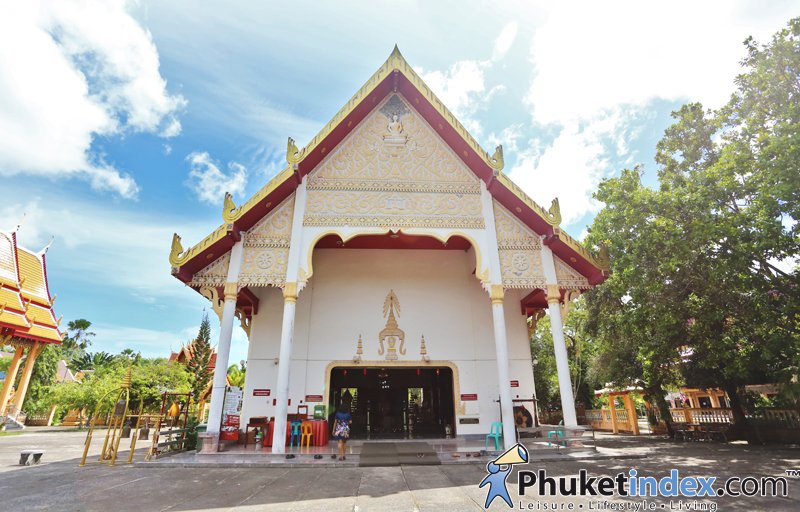 Wat Pra Thong is the oldest temple on the island and was created when Thalang was still Phuket’s capital. Wat Pra Thong temple is located in Thalang, about 20 km from Phuket Town. Phra Thong Temple’s most notable artifact is the golden Buddha statue “Phra Phud” that is half buried in the temple floor. The myth of Phra Pud (or Phra Thong) is one of Phuket famous histories.

Once upon a time, there was an unexplained story about Phra Phud Temple. At that time, in Thalang district, a thunder storm and flash flood hit Thalang area, attacked rice fields and other agricultural products. After the dark storm comes, the bright sky exists. The farmer’s son tied his buffalo to what he thought was the brushwood, then went back home. That night, the boy and buffalo passed away. The father was afraid of what had happened to his son and buffalo. Later that night, the father dreamt about the death of his son. He died because of tying a buffalo at the golden peak of the Buddha image’s Ushnisha. Later morning, the father and his neighbors went to where his son tied a buffalo. They pour water and polish the holy statue. Then finally found the Buddha image’s Ushnisha underneath.

Thalang city ruler noticed the news of new founding holy statue. He led his troops to dig it up, but unfortunately found a swarm of bees instead of scared object. Surprisingly just people who dug a statue were bitten! And in the 18th century, an invading Burmese army tried unsuccessfully to unearth it and was driven away by a swarm of hornets. In 1968 the visible part of the statue was covered with gold by the villagers and a temple hall was built over the statue by the monk “Luang Phor Sing”.

On March 21, 1959 His Majesty King Bhumibol Adulyadej visited Wat Phra Thong. You can see the king’s signature enshrined above the entrance door at the temple hall.

This temple is an amazing place that you must visit in Phuket. Chinese people believe that the Buddha image or Phra Phud came from China. It is believed that if you pray to Phra Phud, thing will become true. And the name “Phra Thong” also has a good meaning, thong mean gold in Thai.