For anybody that doesn’t really know what Yoga is all about, the most popular type of Yoga available in Phuket is known as Hatha Yoga which concentrates mainly on the physical and exercise related aspects. Yoga originated in

India and comprises of a series of sometimes challenging stretches and poses, many of which appear quite amazing as the body contorts into impossible looking shapes, and the Yogis (the term for a Yoga student) normally perform them in a set routine depending on the type of Yoga practiced. Yoga is essentially based on different postures (Asanas), breathing techniques (Pranayama), poses (Mudra) and meditation. Many people who try Yoga enjoy the experience immensely, and can expect great improvements in strength, balance and energy levels.

There are a few well known variations and different techniques in Yoga. Methods commonly practiced in Phuket include:

Hot Yoga, aka Bikram Yoga refers to any Yoga class done in a heated room. The room is usually maintained at a temperature of 95-100 degrees Fahrenheit. Most often, Hot Yoga tends to be a flowing, Vinyasa style of practice in which the teacher instructs a series of linked poses. As you can imagine, a vigorous Yoga session at high temperature promotes profuse sweating and makes the body very warm. Living Yoga master Bikram Choudhury is a hot yoga innovator. His method is a set series of 26 postures, including two Pranayama exercises, each of which is performed twice in a single 90-minute class.

Hot Yoga, now the most popular Yoga for men and women, is the best 90 minute workout you can have, toning your muscles and getting you in shape fast! Beginners are welcome and it’s challenging for even the most advanced practitioners. Your instructor will guide you through the postures to provide you with the best workout ever. Sweat, detox and lose fat. No more stress, aches and pains, a Hot Yoga class is like a gas station, you gain energy instead of losing it.

Yoga changes the construction of the body from the inside out, from bones to skin and from fingertips to toes. So before you change it, you have to heat it up to soften it, because a warm body is a flexible body. Then you can reshape the body any way you want.

Hot Yoga flushes away the waste products, the toxins of all the glands and organs of your body. It provides a natural irrigation of the body through the circulatory system, with the help of the respiratory system. It brings nourishments to every cell of your body so that each one can perform its function and keep your body healthy. Bikram Yoga also employs heat to further that cleaning process: When you sweat, impurities are flushed out of the body through the skin. Practicing Yoga not only increases our supplies of oxygen, but it also teaches us how to use that oxygen properly – we learn to control the breath through Pranayama. 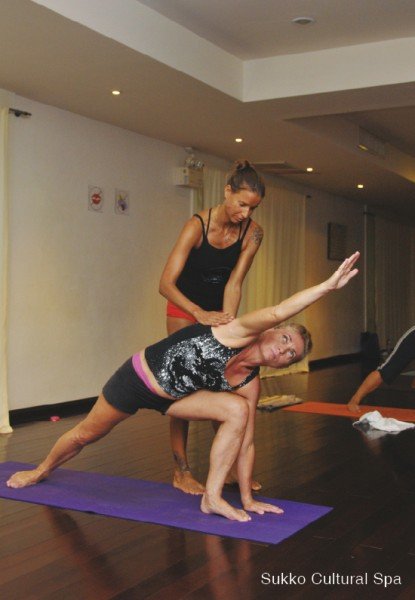 Ashtanga Yoga is a system of Yoga transmitted to the modern world by Sri K. Pattabhi Jois (1915-2009). This method of yoga involves synchronizing the breath with a progressive series of postures—a process producing intense internal heat and a profuse, purifying sweat that detoxifies muscles and organs. The result is improved circulation, a light and strong body, and a calm mind.

About the Ashtanga Series of Poses

The first, or primary, series is described in Yoga Mala. The primary series is called Yoga Chikitsa, which means Yoga therapy. It is intended to realign the spine, detoxify the body, and build strength, flexibility, and stamina. The series of about 75 poses takes an hour and a half to two hours to complete, beginning with sun salutations (Surya Namaskara A and Surya Namaskara B) and moving on to standing poses, seated poses, inversions, and backbends before relaxation.

The intermediate or second series is called Nadi Shodana, meaning nervous system purification. It cleanses and strengthens the nervous system and the subtle energy channels throughout the body. This series is only introduced when the student has mastered the primary series. It follows the same progression (sun salutations, standing, sitting etc.) as the primary series, but introduces new poses and variations.

The four advanced series are called Sthira Bhaga, which means divine stability. Pattabhi Jois originally outlined two intensive advanced series, but later subdivided them into four series to make them accessible to more people. These series emphasize difficult arm balances and are only appropriate for extremely advanced students. There are very few students practicing beyond the second series.