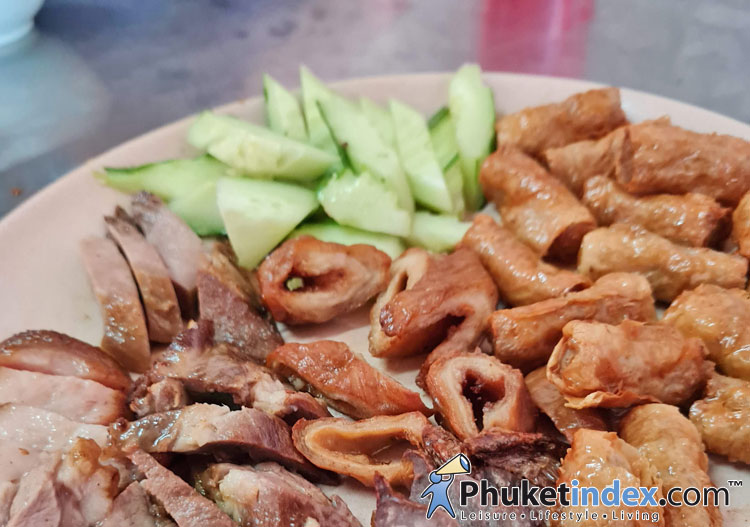 When it comes to Phuket cuisine, this dish called “Loba” will not disappoint. Loba, in my opinion, is a food with a complicated preparation method.

To make Loba, first stew the pig’s head, lung, and intestines, and then fry them again. You must wash the pig head, lungs, and intestines before starting the cooking process to ensure that they are not fishy or odorous.

Loba is one of Phuket’s most well-known local delicacies. Even though it appears to be high in calories, it is commonly consumed as a snack in Phuket. Since pork is the main ingredient in Loba, I believe it should be an old people’s trick to figure out how to eat every portion of pork in the most cost-effective way possible.

Loba is made by stewing the pig’s head and offal (such as the lungs, liver, heart, and intestines) with Chinese spices and black soy sauce until the meat is slightly cooked. As I have seen in the shop, they will have already completed this step, stewing the pork, and will prepare the stewed pork next to the hot pan. After the customer orders, the pork stew will be fried and served as a hot snack, crispy on the outside and fluffy on the inside, with a flavour of spices and soy sauce.

Other than the various parts of the pig’s head and pork offal, fried tofu is also available at the Loba store. Some Loba shops bring yellow tofu and cut it into a triangle shape, then rip in the middle, stuffed with bean sprouts, battered and fried, called “Tao Guo Ji”.

They also serve “Gien,” which is pork and yam wrapped in tofu and deep-fried. Gien is a dish that children adore because it is both visually appealing and tasty. If you’re dining with your mates, I suggest ordering Gien, which is guaranteed to satisfy everyone.

Another key part of this menu is the Loba dipping sauce. The sauce has a sweet and sour flavour and is made from tamarind simmered with sugar, with dry chilli applied later depending on the amount of heat requested by the customer.

Loba, as it is known, was originally a Hokkien Chinese dish. It all started with the Chinese Hokkien who settled in Phuket many decades previously. The word “lo” means “to boil” or “to stew, and the word “ba” means “meat”.

Loba can be ordered as a mixed set, or you can order individually, selecting only the items you want to eat. Personally, I enjoy eating “ears” because they have crunchy cartilage when chewed. Next, it’s “Gien”, it is really delicious. The other one I like is “tongue,” which is not greasy and tastes like lean pork.

Today, I am introducing you to a Loba shop near Mae Ya Nang Shrine. It has been in service for over two decades. Open 8.30 – 15.00 (Closed on Buddhist Holy Day)

Previous Post Where to stay in Phuket – Cassia Phuket Hotel