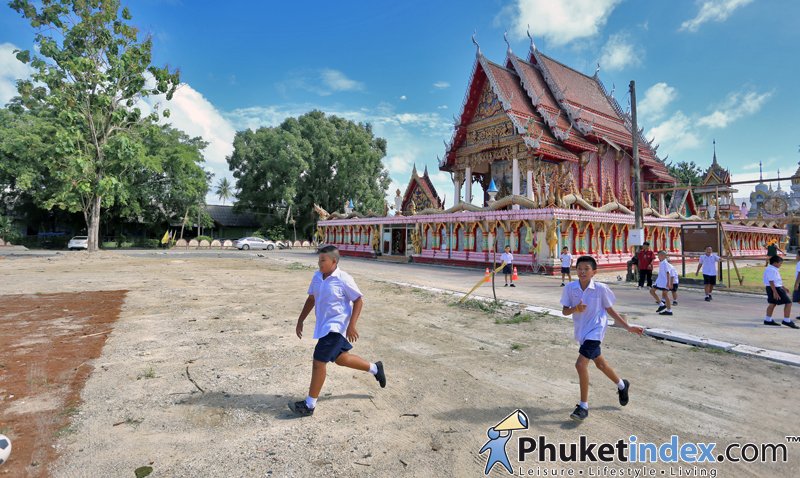 Phra Nang Sang Temple was built more than 200 years ago. In many years ago there are a lot of unfinished buildings and not have an enough space for tree and community activities. Many new constructions replace an area of trees, excluding the old chapel that the Fine Arts Department looks after.

A good news is on January 2018 (this year) Phuket Governer had an order to reorganise something in the temple as a demolition of the improper wrong shape of Luang Por Cham monument and other 17 constructions.

Now the temple have many space for community activities and it become a peaceful place. Today there are many students come to play football.

This is a good place to visit, one of historical temple in Phuket. The new chapel, it looks very elegant in a gold – red color. The travellers can read story on the wall in this new chapel. Historical paintings including the drawing of Phuket Heroines’ story are shown on wall too.

This historic temple involves a legend of Phra Nang Leud Khao (“A lady with white blood”). The legend was told that there was a wife of a city’s ruler who was a devoted Buddhist. She was calumniated she had an affair with another guy. Before getting punished, she asked to travel to Lanka to pray towards the Buddha’s relics. On her way back she stopped at Thalang (Phuket’s former name) and built this temple. She later traveled back home and received a death sentence. But as she was innocent, it’s shown that her blood became white. The temple was later named Phra Nang Sang Temple (“A temple built by the lady”) and has later become a sacred temple among locals.

In 1785 Burma prepares a troop of 144,000 solders targeting to Siam in their pursuit of boundary expansion. King Padung and his mighty army defeated Raman , Thai Yai, Maneepura, and Ya Kai. The war was known as 9 troops. Burmese troops also defeated Pak Phra camp. Lady Jan, a prisoner of Pak pra camp escaped to Baan Mai Khao, Baan Saku, Baan Kien and Thalang Town. Burmese troops invaded Thalang. It was such a bad time since a governor died and all the people were in despaired. Fortunately, Thalang has Lady Jan and Lady Mook who were a gist of Thalang people. They gathered villagers from Baan Saku,Baan Nai Yang, Baan Mai Khao, Baan Kanan, Baan Lipon, and Baan Raing, and organized a defense at Wat Pranang Sang to protect Thalang from invasion.

As it is one of oldest temple in Phuket, so it have many story here as a treasure map of Thalang, someone said this treasure belonged to the Thalang governor. Another said it was surplus money from the building of the temple of Pranang-Lead-Khaow . The answer is hidden for the time and yet to be discovered by the right person. For me, it is the temple that my family is most familiar with as we visit on every special occasion such as the anniversary of my grandparent’s death.

Previous Post Focus on excellence – An interview with Michal Zitek