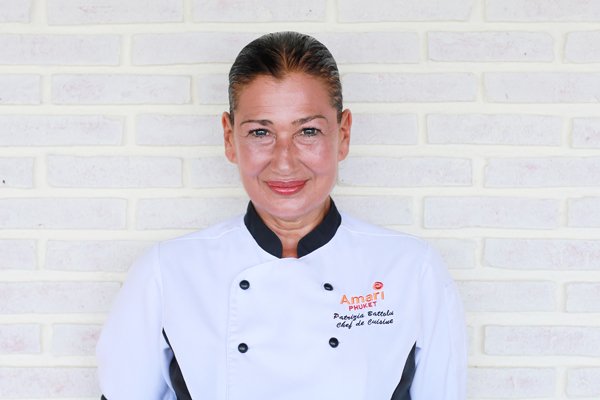 Chef Patrizia begins her culinary journey in Phuket in one of the most beautiful Italian restaurants on the island. Phuketindex visited her at La Gritta to learn about her passions and her food.

Chef Patrizia comes from Rome. She was originally born in Sardinia but lived almost all of her life in Rome for her profession before she moved to Phuket. Like many chefs, she feels cooking is her chosen profession since an early age. “I started to cook when I was very young, around ten years old. My mother played an important role as she was always very curious and interested in international food. So it’s not difficult for me to cook,” says Chef Patrizia.

She started to cook for 30-40 people when she was only a teenager then Patrizia went to university to study languages (Chef Patrizia speaks English and French and little bit of Arabic) but the culinary arts always held her interest.

“I love to play with the colours of food and combine as many different ingredients as possible. Because life is very rich so I want my dishes to be rich like life.”

Her mother was her great inspiration and mentor.Absorbing her mentor’s cooking style resulted in interesting combinations.

Her cooking career officially began when she was about 21 years old in a hotel in Northern Italy. Chef Patrizia later returned to Rome after this experience. There she helped her uncle in a catering service before she became the manager of a small restaurant in the center of Rome. “Small but very popular,” as she says. She started her own catering service herself after a while, supplying for weddings, meetings and events. “The last big meeting before I came here was for 700 people,” she says.

About La Gritta
La Gritta serves traditional Italian cuisine with a contemporary flair with an extensive and discerning wine list on a beachside dining terrace overlooking the Andaman Sea. The restaurant is one of the most romantic places to dine in Phuket especially with its scenic sunsets. Open for lunch and dinner from 10:00 till midnight daily. www.lagritta.com

Special Dishes
Chef Patrizia specially selected some of her best dishes for Phuketindex. The ravioli represents her cooking style with the combination of various interesting ingredients while her pork tenderloin is a recipe she’s justifiably proud of. Snow fish represents her own preference – tender, tasty, light and healthy.

With Roma artichokes, sautéed potato tagliatelle with garlic and herbs and meunière sauce